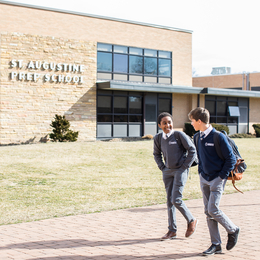 Mission Over Maintenance
St. Augustine Preparatory School specializes in educating young men and now offers the opportunity for them to begin their journey in this lifelong brotherhood as eighth graders.

One of the most common pieces of feedback that Fr. Robert Murray, O.S.A., head of school at St. Augustine Prep, hears from parents is how they wish their son could have attended a middle school at the Prep.

So, about seven years ago the school started discussing the possibility of a middle school and conducted feasibility studies. Although it decided an entire middle school was not something it wanted to undertake, there was enough support for an eighth grade.

St. Augustine’s inaugural eighth grade class entered for the 2021-22 school year. Brendan Towell, associate director of admissions and alumni leadership, says they received more interest than expected. He takes this as a clear indication that something special is happening on campus.

“In a difficult era where many Catholic schools are consolidating or closing, we’re expanding with a new grade level and construction of new buildings, and that’s a credit to our faculty, staff and coaches who live our mission and aren’t satisfied with the status quo. There has to be something to [what we’re doing] and I encourage families to give us a look,” he says.

St. Augustine may seem a bit off the beaten path—located in Richland on a 118-acre campus—yet every day, buses converge on this rural setting carrying boys from all over South Jersey. St. Augustine is an Augustinian Catholic school, owned and operated by the Augustinian Friars, a religious order that specializes in the education of young men, employing brain-based research to meet the needs of its students.

“Although there are similarities between teenage girls and boys, there are differences to recognize, including the ability to let out some energy throughout the day. Students here have no more than two academic classes in a row without a break that could range from five to 10 minutes or longer,” Towell says

The sprawling campus also allows for the classroom to extend beyond four walls. “St. Augustine himself did not teach from behind a podium and preferred being outdoors with small groups. When possible, we have that ability to take the learning outside,” he says.

St. Augustine Prep hosts an annual Brotherhood Day where there are no classes and grades face off in friendly competition that includes both athletic and academic games, culminating in a giant tug of war. “Boys respond to competition and this is a chance to show them that it’s OK to put the books down and get outside. … Parents report that their sons tell them how much fun they are having, and truly, when the Brotherhood is strengthened, then the academics will follow. Community time makes them want to get involved—we have a culture of participation with 100% of the student body in a club or sport,” says Towell.

Character development is further enhanced with an active campus ministry, inclusive of all faiths. Community service projects and partnerships throughout the year encompass a Thanksgiving food drive, Christmas toy drive and winter clothing drive, and the school partners with parishes and charities in Camden and is working to expand into Atlantic City and Vineland,  he says.

These are just a few of the opportunities that incoming eighth graders will now have at St. Augustine. Towell says eighth graders have their own classroom building on campus, but are integrated on campus with lunch and other activities. They are also paired up with a junior in a Big Brother program to help them acclimate to the Hermit life.

Although the eighth graders can only compete athletically at the intramural level for St. Augustine, they have the ability to start training a year early with the high school coaches and teams, with full access to the facilities, including the weight room and pool.

And as for uniforms: The Hermit blazer, an iconic symbol of the high school, is not worn by eighth graders, Towell says. Instead they wear a shirt and sweater with a special class tie. “The tie is a badge of honor. If, one day you meet a junior wearing that tie, you’ll know he’s been with us since eighth grade,” he says. “I am looking forward to when this class of 2026 graduates as the first class to be at St. Augustine for five years.”

Towell is proud of the progress St. Augustine continues to make. “I look around the educational landscape in America and there are too few schools willing to work on their curriculum and acknowledge that boys learn differently—not better or worse. Too many are working toward a test, but what we are doing here is preparing the next generation of fathers, husbands, men who will lead,” he says. “We’re not here to prepare them for college; we’re educating them for life.”