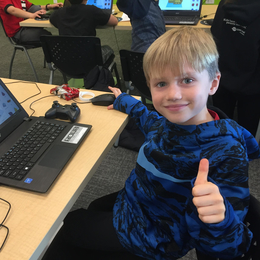 TEAMWORK, LOGIC AND PROBLEM SOLVING ARE THE SKILLS THAT 21ST CENTURY EMPLOYERS ARE SEEKING, AND CODING ENCOMPASSES ALL OF THEM. However, many people misunderstand coding due to how programmers are depicted in the media. “Coding is creative. It’s for those who are artistic or scientifically inclined. It’s really for everyone—boys and girls.” says Sean Weinberg, owner of Code Ninjas in Cherry Hill, a franchise that provides coding education for ages 7 to 14.

Suburban Family Magazine spoke with Weinberg, who says the coding skill set will be “significant to every child, regardless of their career goals or aspirations.” Here, he details just a few of the ways kids can benefit from the curriculum offered at Code Ninjas.

1. Value of coding education for boys and girls.
“A coding education is the single best skill that will prepare children for the world of tomorrow,” says Weinberg. While the world is rapidly evolving, technology—and the people who create it—play a huge role in influencing our daily lives. “Code Ninjas aims to put kids in the programmer’s position of shaping the world around us while working through problem solving in an engaging and exciting way,” he says.

And because so many people are intimidated by the idea of coding, Code Ninjas familiarizes it by using a belt-based system similar to karate. Students, called “ninjas,” progress from white to black belt in the dojo under the direction of senseis (instructors), beginning with drag-and-drop programs  and moving up to JavaScript, CSS, and HTML, eventually leading to the design and launch of their own 3D app, which earns their black belt.

2. Kids on the spectrum thrive.
Weinberg says many of the traits that are typically regarded as challenging for children on the spectrum, are actually opportunities when it comes to programming. “Many autistic children have a heightened ability to understand spatial relationships and can focus with intensity—qualities that lend themselves to programming,” he says. “Some children have a hard time finding an after-school activity where they connect and feel like they belong, but we’ve created a neuro-diverse environment where kids of all types are successful and engaged with the environment.”

3. Learning happens in an open, social environment.
Although the dojo is where the learning happens, topics are presented in a non-classroom environment. “We don’t want our ninjas to feel like they are in school,” Weinberg says. “We give them the freedom to move around, change their seat and play with toys while learning—whatever comes naturally to them.” Without restrictions, students don’t feel the pressure to be on the same level as everyone else. “One of the fundamental problems in education is the idea that every student needs to be on the same page,” he continues. “Here you control the pace of your own learning.”

4. Year-round flexibility.
Code Ninjas is a drop-in program recommended for two hours a week. The curriculum is designed to take four years, but it varies for every student depending on their skill progression and how often they attend. “As with every endeavor, the more consistent, the better you get at it,” Weinberg says. Along the way, students are given “Prove Yourself” challenges, where senseis explain a video game concept and the child builds it. “There are hundreds of ways they can create the game and we support them through the execution,” says Weinberg.

5. Experienced and educated instructors.
“I am so proud of our instructors. They are a fundamental piece of our success,” Weinberg says. Senseis this past year included three class valedictorians who have gone on to higher education at Penn, Georgia Tech, Carnegie Mellon and Drexel. Senseis also include members of Cherry Hill East’s acclaimed robotics team. “These are brilliant kids who also have great personalities. The senseis provide a wonderful added value for kids who might be having a hard time in school,” he says. “The senseis show children how much they are capable of achieving.”

Weinberg invites parents to inquire about a free 30-minute, game-building session. “There’s no reason not to try it and see how your kids feel. We see people come in with assumptions and they leave feeling great having built something,” he says. Call (856) 553-4183 or email CherryHillNJ@codeninjas.com for information.