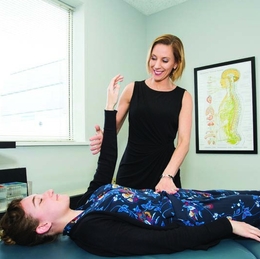 EXHAUSTION. ASTHMA. ECZEMA. DIGESTIVE PROBLEMS. ACNE. ANXIETY. THESE ARE JUST SOME OF THE HEALTH AILMENTS PLAGUING PEOPLE TODAY, NO MATTER THEIR AGE. After years of unsuccessful doctors’ visits and medications, many just learn to live with the pain and discomfort,  accepting that this is simply how their body was meant to be. However, at Natural Health Improvement Center (NHIC) of South Jersey, health problems are handled with natural and non-invasive methods, resulting in the elimination of symptoms and a return to a normal, full life.

Opened in 2015 by Sarah Outlaw, MH, MSACN, NHIC uses a health improvement program called Nutrition Response Testing ®. This non-invasive system of applied kinesiology-based muscle testing analyzes the body and gets to the root cause of a person’s health problems and handles them with a variety of nutritional recommendations and whole food supplements.

Outlaw, who is a clinical herbalist, functional/ clinical nutritionist, and advanced Nutrition Response  Testing ® practitioner, sees patients who have tried everything. “Most people see this as their last hope,” she says. “They’ve been to multiple doctors who couldn’t find anything wrong in their blood work  or who keep them on medications. These people are sick of being sick and tired. They want answers. They want to feel well again.” involves testing the body’s muscle responses and neurological analysis to determine the best course of action to allow the body to repair itself. Using specific acupuncture points on the body, Outlaw tests a person’s muscle response at each pressure point and, using a stressor  kit, can test the body for specific sensitivities like wheat, corn, sugar, dairy, mercury, chlorine, etc., and discover if the body has sensitivities to those elements. From there, Outlaw is able to design a  customized clinical nutritional plan that includes the highest quality nutritional supplements mainly from Standard Process.

“Once patients begin a program, they often notice changes quickly,” says Outlaw. “They have better digestion, higher energy levels, improved libido, they see a difference in their hair, skin and nails, their  mental fogginess clears, and they have fewer headaches.” And although NHIC cannot diagnose medical conditions or take patients off  an y prescribed medications, many of those who come to Outlaw show their results to their general  practitioners who end up taking them off t heir prescriptions for controlling blood pressure or cholesterol.

The medical community often doubts this approach, even though over 50 percent of her patients are nurses and doctors, which is frustrating for Outlaw  and colleagues in her field. “The medical community doesn’t acknowledge  how crucial nutrition is to how a body functions,” she says. “We’ve had patients tell us how they’ve complained of stomach aches from eating wheat but their doctors didn’t even ask for a food journal. Food is important—it’s all about the food!”

Outlaw is a success story herself, having been helped with Nutrition Response Testing ®  before she began practicing it. For years, she suffered from  Lyme disease, hypothyroid, miscarriages and adrenal fatigue. Her health spiraled to the point where she even began stuttering and had no energy to leave the house. She had heard of Nutrition Response Testing ®  and found a provider who helped discover she was sensitive to wheat, oats and suffering from extreme adrenal stress. After only a few days of the program she felt relief from the most severe symptoms. Within a few cycles of treatment, “it was like a complete 180,” she says.

Outlaw knew this was something the community in South Jersey  needed. Since opening her private practice  in 2015, NHIC has tripled in size. Laura Heaney-Burcher, who was previously NHIC’s practitioner’s  assistant, is now its Nutrition Response Testing ®  associate practitioner, and also sees patients in the Cherry Hill location. NHIC has a second office in an unexpected location—Des Moines, Iowa, where Outlaw sees patients every other weekend. Despite having no connect ion to the area, she was personally asked to open an office in this region by a representative for Standard Process, the company that provides their nutritional supplements.

“He said the need in this area was great and there was no one there who was trained the way I was. As a healer I couldn’t say no,” says Outlaw. As she began marketing the office last year, appointments  filled up so fast they moved the  planned opening from June 2018 to February 2018. The office is expanding from 1,000 square feet to 5,000-plus in early 2019.

Between both  locations, and with the support of her family, Outlaw now has two of the largest and fastest-growing practices in the country, and more people want to experience the benefits of Nutrition Response Testing®. “I want people to understand that what I do is all based in biochemistry and physics,” she says. “It’s easy to understand once you’ve seen it in action.”

Outlaw adds that treatment is affordable and about 85 percent of her patients get reimbursed through their insurance for their care.

“Whatever is going on with their health, people think it’s normal. We accept those symptoms when really we should feel great,” she says. “We have been able to give people their lives back simply with the nutrition their bodies have been searching for.”