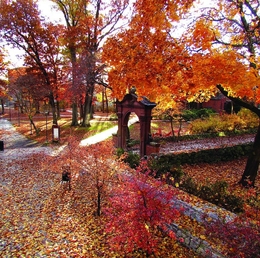 A Winning Culture
Ramapo College of New Jersey creates an atmosphere where student-athletes can succeed in more ways than one.

EARLIER THIS YEAR, AS MILLIONS OF FOLKS ACROSS THE COUNTRY WERE GEARING UP FOR MARCH MADNESS, the men’s basketball team at Ramapo College of New Jersey was experiencing their own flurry of excitement.

After capping a successful season that saw them win their second consecutive New Jersey Athletic Conference (NJAC) championship, the team headed to the NCAA Men’s Division III Basketball Tournament where they would upset the No. 1 seed and eventually go on to make the Final Four in Salem, Virginia for the first time since 1991. Unfortunately, the team fell short of the ultimate goal of winning it all; however their storybook run has energized an already successful program and  the excitement has  spread across campus.

It’s all part of the winning culture defined by head coach Chuck McBreen who has been pacing Ramapo’s sidelines for 20 years. When he arrived at the school, the team was coming off a 520  record and was not known as the perennial powerhouse they are today—the team is consistently ranked as one of the top teams in the country—yet  he saw an opportunity to grow t he  program  and two decades later, despite being the smallest public college in the state, Ramapo is very much on the map.

For McBreen, it all starts with his ability to form relationships with his players that go beyond the playing court as the team may be working hard at  practice one day and volunteering at an elderly home or a pediatric cancer ward the next.

“The thing I enjoy most is being around student-athletes and having the opportunity to mold them  into successful young adults when they leave here. I hope I play a large part in  that process,” McBreen says.

“We teach our players life skills through the sport of basketball,” he adds. “They are going to be held accountable in the classroom, on the court and in the community. We teach them about being responsible, about preparing properly, being  organized  and working hard and making a commitment. We also teach them how to handle adversity. You have to fail before you can succeed.”

Graduate Thomas Bonacum, who majored in business management and played a key role on last year’s squad leading the team in points, assists and rebounds, feels McBreen and his staff create  a famil ial atmosphere that players will cherish forever.

“The thing I loved most a bout being a student-athlete  at Ramapo was the relationships and the friendships we are able to create between other teams and the staff as well. … Our program is a big family and the brothers I’ve made over the last few years will be my family for years to come,” Bonacum  says.

And it’s not just the basketball team garnering attention and helping propel the college into th e  spotlight. The women’s volley ball, softball and baseball teams have all shared recent postseason success and this past year the school had two  All-Americans in track and field. In fact, Ramapo was ranked No. 45 out of 323 in the Learfield Directors Cup standings—which recognizes the nation’s best overall collegiate athletic programs—for Division III schools. It was the school’s highest ranking ever.

“There is a growing excitement on campus in regards to our sports teams,” says Harold Crocker, director of athletics. “Students, faculty and staff have rallied around our success.”

For Crocker, the experiences are made that much more special because of the commitment of the student-athletes to not only athletics, but more importantly, their dedication to academics as well. Division III athletes do not receive scholarships so the competition is just as fierce in the classroom.

“Division III athletics is all about balance,” says Crocker. “Student-athletes must juggle rigorous academics as well as  a competitive schedule,  with many also engaging in extra-curricular activities  and employment.

As Ramapo gears up for what they hope is another magical basketball season, Coach McBreen is faced with the reality of losing all five of his starting seniors from a year ago. However, with 13 players returning to the roster, he’s ready to get back on  the court and push for a third-consecutive NJAC title.

“The challenge we have ahead of us is monumental, but we are excited for the opportunity and  to have that target on our back,” McBreen says.

And it would certainly seem that McBreen is up for the task. Having turned around the program during his two decades at Ramapo is the culmination of his career, and maybe one that he didn’t expect to happen after coaching previously in high school as well as the a brief stint in Division I basketball.

“If you would have asked me when I got here if I expected to be here this long, I would have said no,” McBreen says. “But I’m happy to call Ramapo home for the past 20 years and I think taking over a [struggling] program and watching us evolve into a Top 5 national power is something I’m quite proud of.”