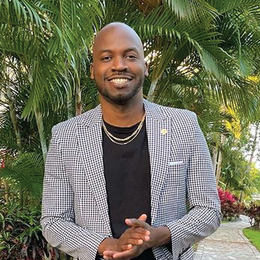 STAR ATHLETE
Matt Coleman
The Moorestown resident will be heading to Utah to compete in the annual 2022 Intermountain Healthcare IronMan 70.3 World Championship in late October. The physically demanding competition will have Coleman and his competitors swimming for 1.2 miles before launching into a 56-mile bike ride followed by a 13.1-mile run. He won the Medford Lakes Colony Sprint Triathlon earlier this year and, after placing third in his age group in the Eagleman 70.3 Ironman Race in Maryland, qualified for the upcoming Utah competition.

STAR CITIZEN
Joe Musumeci
As the owner of Swedesboro’s Grandpops Army Navy, Musumeci has been offering customers the option to send packages of boots and uniforms to citizens in Ukraine. The idea began when two Ukrainian women, Victoria Veretchak and Marta Makar, were visiting military stores around the area earlier in the year to buy uniforms to send in bulk. To help their grassroots cause, Musumeci has been spreading the word through signage, social media and customer interactions. Since February, 30 citizens have since participated—and were also able to leave personal notes in the shirts.

STAR STUDENTS
Seneca High School’s Students of the Month
Freshman Karena Kelly, sophomore Peyton Reese, junior Ahtyana Enochs and senior Riley Fearon were named October’s Students of the Month at Seneca High School in Tabernacle. The high school selects its monthly honorees based on how successfully they exemplify the spirit of Seneca through a number of metrics, such attitude, dedication, acts of service, participation, generosity and academics.

STAR ALUMNUS
Garvenchy Nicolas
Nicolas, a 2014 graduate of St. Thomas Aquinas College, earned his degree in business administration with a minor in international business. He has gone on to become a successful project manager, executive director, author and clothing designer. Nicolas became an IT project manager for Blue World Inc. and is the founder and executive director of Synergy Today, a global foundation that forms partnerships in support of education for children in underserved communities.

STAR ALUMNUS
Keith Dawkins
The Ramapo College class of ’94 alumnus is also president of Harlem Globetrotters and Herschend Entertainment Studio, as well as founder/CEO of Rock Hill Media Ventures. As an award-winning strategic and creative CEO, he brings nearly three decades of experience in the media/entertainment, professional sports and philanthropic industries to his work. Dawkins aims to bring the iconic basketball franchise to the next level beyond the court, expanding the brand to millions of households via his expertise in areas like marketing consumer products and international development.