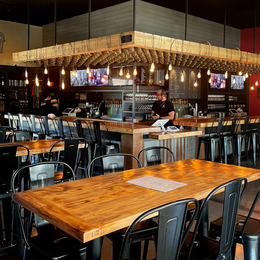 Asheville, North Carolina, is widely accepted as the brewery capital of America, boasting more breweries per capita—28.1 per 100,000 residents—than anywhere else in the country. Between 2016 and 2019, the economic contribution of Asheville-metro breweries was almost a billion dollars; Grand Rapids, Michigan, and Portland, Oregon, are close contenders, but no town or city on the East Coast in general, or in New Jersey specifically, rivals these areas.

However, a quarter-mile stretch of Main Street in historic Medford is poised to become home to four breweries, each one a stone’s throw from the next.

“A quarter-mile on Main Street Medford isn’t Asheville, but if you visit Asheville, every third storefront is a brewery—and they all coexist, they collaborate, they promote the town as a destination rather than competing with each other,” says Bob Hochgertel, owner and managing director of King’s Road Brewing Company. It is that spirit of unity that not only King’s Road but also the longstanding Lower Forge Brewery, the well-established Magnify Brewing Company and the soon-opening Farm Truck Brewing have all embraced.

King’s Road opened its second location in the lovingly restored Kirby Brothers Mill building after its now-five-year-old Haddonfield brewery could no longer meet growing customer demand—even in the midst of a pandemic, and after having already moved to a larger downtown location. Knowing that King’s Road was looking to grow, owner/developer Tristan Sylk auspiciously showed Hochgertel a location in a blossoming retail location, The Feed Mill at Medford Village.

“Tristian recognized the impact that King’s Road had on the downtown [Haddonfield] economy and he thought that we would be a good fit and an asset for the growing downtown of Medford,” Hochgertel notes, rattling off some of the other businesses King’s Road is neighbors with, like Harvest Coffee Roastery, local barbecue chain Whole Hog Cafe, Wing it Forward, Peewee’s Ice Cream, Studio 67 and the Shoppes at Medford Mill.

Anyone who’s navigated a business through the turbulent waters of the past two years knows what a uniquely challenging set of obstacles have punctuated that journey. And while King’s Road has certainly come up against a host of those hiccups—supply-chain delays and the uncertainty of when COVID would finally start abating being chief among them—Hochgertel is quick to note that the outpouring of community support made opening in Medford “a pleasantly surprising process.”

“It wasn’t easy, but it was easier because of the community support: The town has been supportive and the administration had been supportive,” he says.

Chuck Watson, Medford’s mayor, has been thrilled to welcome King’s Road to the township. Its location puts the brewery within walkable proximity to an array of other local businesses that help make the municipality even more appealing to visitors.

“It’s going to make us more of a destination than we already are becoming,” says Watson. “People like to go on these beer tours, so they’ll be able to come here and visit four of them at the same time—which will also bring people out to our restaurants and shops so they can see what our Main Street is all about.”

The mayor also observes that King’s Road wasted no time establishing itself as part of Medford’s vibrant, close-knit community.

For Hochgertel, community involvement is a must for King’s Road, as he wholly embraces the philosophy of rising tides lifting all ships.

“Rather than worrying about how big our slice of the pie is, my goal is to make the pie as big as possible,” he says.

And with South Jersey residents feeling more and more comfortable shifting back to their pre-COVID habits and hobbies, having areas like The Feed Mill at Medford Village advantageously positioned like a walkable outdoor food court keeps elevating Medford’s image as one of South Jersey’s must-visit gems.

“We’re in the process now of doing an ordinance that’s going to allow what they refer to as an ‘open container,’ which we’ll probably limit to the Village area, so you can go to a brewery and then walk to a restaurant with your drink, or go from brewery to brewery to brewery,” Watson explains. “That way, you won’t be limited in what you see.”

And while it is deeply rewarding to work communally for everyone’s benefit, Hochgertel does appreciate knowing that King’s Road’s goal to make everyone feel welcome has already been a successful one.

“We hear it in Haddonfield all the time because we’ve been there for years, and we’re starting to hear it in Medford now that we’ve been here long enough, but the best compliment we get is when people tell me that, for them, King’s Road has become their neighborhood Cheers,” he says. “I cannot ask for more than that.”