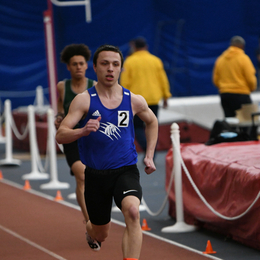 STAR ATHLETE
Martin Cosgrove, Camden Catholic wrestling
Cosgrove capped his outstanding wrestling career with the Fighting Irish by becoming the program’s third two-time state champion. The state championships returned to Atlantic City’s Boardwalk Hall after a one-year hiatus, and Cosgrove took on Passaic Valley’s PJ Casale in the final bout of the event in a marquee matchup of former state champs. Cosgrove earned a thrilling 6-5 decision to claim the title, adding to the state crown he won as a sophomore. He also placed third in the state as a freshman but missed last year’s tournament because of a broken hand. Cosgrove will continue his wrestling career at Penn.

STAR TEAM
Lenape boys basketball
The Indians captured the third sectional championship in program history with a 45-33 win over rival Cherry Hill East in the South Jersey Group IV final. The two teams had split a pair of matchups during the regular season, but Lenape took the rubber match as Tayvon Gaither erupted for 24 points and 11 rebounds and Derek Simpson added 12 points. The Indians moved on to the state semifinals, where they dropped a tough 49-47 game to Marlboro to finish their memorable season with a 27-4 record.

STAR TEAM
Cherokee girls basketball
A magical season for the Chiefs advanced all the way to the Group IV state championship game, where they battled before falling to Westfield 43-37 to end a remarkable 27-4 campaign. Cherokee defeated district rival Shawnee 43-35 in the South Jersey Group IV final to repeat as sectional champions and topped Jackson Memorial in the state semifinals. Earlier in the year, the Chiefs won the South Jersey Invitational Basketball Tournament. The team was paced by seniors Katie Fricker and CJ Apistar and juniors Gabby Recinto and Delaney Jackson.

STAR ATHLETE
Henry McFadden, Haddonfield boys swimming
The Meet of Champions returned after a one-year hiatus during the pandemic, and McFadden seized the opportunity to capture a pair of state titles that put him in the school record books. He took first place in the 200 free and set a Haddonfield record with a time of 1:35.80, and added another victory in the 500 free, breaking his own school mark by touching the wall in 4:24.32. McFadden also teamed with Conor Jellig, Bennett Wright and Tre Cottrell to set another school record with a time of 3:11.09 in the 400 free relay, placing fifth.

STAR ATHLETE
Michael Mazero, Paul VI boys track
Mazero, a senior, had a night to remember at the indoor track Meet of Champions. He placed first in the 400-meter dash with a time of 49.02 seconds and also competed in the 55 meters, finishing 15th after clocking a time of 6.71 seconds. Mazero was also the Non-Public A state champion in the 400 and took fourth in the 55.