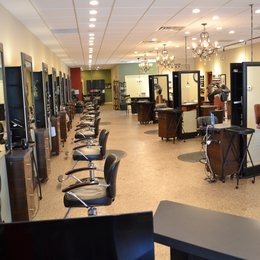 She was young when her mother, Janet—a licensed cosmetologist herself—would take Davies and her sister to the various salons in Haddonfield and Cherry Hill to have their hair and nails done.

The visits helped Davies develop many of the ideas she has about what a trip to the salon should be like, and also what it shouldn’t.

She has carried these ideas with her over the years, and implements them in her own salon today.

“It’s always been really important to me to have a place that is beautiful, and where you would imagine being served tea and cookies, but at the same time, feel at home and comfortable,” Davies says. “A place where you don’t have to be all dressed up, and you really feel like you are among family and friends. You could just stop in for coffee and chitchat if you wanted.”

Of course, the feeling of coming home is just a part of the experience at Nadine Janet Salon and Spa in Medford. Since she opened the doors in 1997, Davies has curated a list of services available to clients that truly envelops the idea of a luxurious day at the spa.

“We have a separate spa with five full-service treatment rooms where we provide various types of massages, facials and body treatments. Our lash lifts, brow/lash tint and air brush spray tan are also done in this private space,” she explains. “Our pedicure room also has its own private area in the spa.”

“We offer every hair service imaginable, from coloring to highlighting, to cutting to perming to straightening, to keratin treatments,” Davies continues, noting Nadine Janet is a Wella Professional color salon with 11 stylists and 14 chairs.

In regard to skincare, the spa exclusively uses Institut Esthederm, which Davies says the salon has carried since the day it opened.

“It is skin care from France,” she explains. “Their skincare is very intensive and can only be used or sold by licensed estheticians. Initially in their process to allow us to use it—they came out to inspect and approve us carrying their product.”

The salon also carries NuGenisis products, which Davies points out is manufactured locally and is found primarily in dermatologist’s offices these days.

On the nail front, Davies says Nadine Janet offers a variety of nail services. A CND-certified salon, acrylics, hard gels, Shellac gel polish and nail art are all available, along with something new they are launching from CND called Plexigel. The Plexigel is used for building and extending nails without the use of acrylic, according to Davies, and is just one of the services Nadine Janet is continuously adding or improving upon.

“We’re constantly getting educated on new products and techniques,” she says.

Offering these services and improvements is important to Davies because to her, Nadine Janet is not just a salon and spa. It’s a place where people can go to transform and feel good in their skin.

What it really comes back to is that feeling of family, and belonging, which Davies believes truly sets the salon apart. In fact, her actual family is also a part of Nadine Janet, from her sister to her husband to her daughters, and even her sons. Although her mother unfortunately passed away before she could see Davies open her own salon, Davies managed to find a way to honor her dreams as well.

“My mother always talked about having her own salon, but she was not able to make that happen,” Davies says. “So, I named my salon Nadine Janet, and Janet, which is not only my middle name, but was also my mother’s name, helps me feel like the salon is also hers. I kind of feel like all these years we’ve been open, she’s been overseeing things and all that we’ve been doing.”