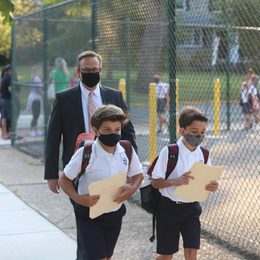 A Plan Comes Together
The Diocese of Camden and leaders from South Jersey Catholic Schools spent all summer preparing for this year. So far, the hard work is paying off.

One of the hottest topics of conversation in recent months has been this new school year and what exactly it would look like in the midst of the still ongoing COVID-19 pandemic. Would parents feel safe sending their child back into the classroom? What were the impacts of decreased socialization and remote learning? How would schools balance trying to create an optimum learning environment while also adopting challenging safety protocols that significantly alter typical interaction?

After having worked in the Diocese of Camden as Director of Curriculum and Assessment for six years, Dr. Bill Watson took over as Superintendent of Catholic Schools in June 2019 and spent the end of his first year in his new role navigating the coronavirus crisis in real time. As students said their virtual goodbyes for the summer, Watson knew the diocese needed to formulate a master plan for this year, so he and dozens of other school officials wasted little time starting that process.

“School ended on a Friday, and the following Monday we were on a Zoom call planning for this year,” Watson says of the urgency placed on the matter.

The diocese assembled teams of principals from both its elementary and high schools who then formed subcommittees focused on issues like how to best keep academic continuity, and effective ways to implement new health and safety measures. Extensive research led to several recommendations that not only considered public health and New Jersey Department of Education guidelines, but also allowed for each school to apply them in different ways to meet its local needs.

Feedback from a survey of parents also played a major role in determining the best course of action. Watson says the diocese received more than 3,300 responses from parents, and about 75 percent of those respondents indicated a strong desire to have their children back in school.

“Parents expressed concern over the realities of the virus, but also recognized that it was important for their kids to be present in school buildings,” he says. “Part of being a Catholic community is being together … and that was a really important thing that we learned, that parents were behind us finding a way—if we could do it safely—to be back in school.”

The lessons learned from last spring have allowed school leaders to devise a “playbook” to handle various situations, including pivoting to all-remote instruction should the need suddenly arise. To be better prepared to deal with that scenario, the diocese took into account further feedback from parents who stated that if their children had to participate in virtual learning, they’d prefer they do so while interacting with a teacher who’s live inside a classroom as opposed to on a recorded video or from their living room. Recreating a more traditional school setting was viewed as a great benefit for students to better learn and achieve a small sense of normalcy.

Despite the challenges of preparing for the new year, the hard work is paying off so far. Watson says that he’s been impressed by both the students and faculty who have shown a willingness to make this transition as smooth as possible. It’s been a real bright spot and provided renewed energy throughout the schools.

“We’ve been able to regain some of the spontaneity of the classroom,” Watson says. “[The teachers] are driven by their love [for what they do] and what brings them joy is to be with their students and teaching them.”

Of course, a big part of the Catholic community is fostering that sense of togetherness. When it comes to the relationship between parents and schools, communication and trust are paramount. Having that foundation in place is a big reason why parents seek a Catholic education for their children in the first place.

“I think they trust us, and that is built on the relationship each school has already established and works hard to maintain,” says Watson. “With each passing day, as we continue to move forward, the kids are learning. School is happening, there’s energy in the classrooms, there’s homework to be done, there are tests to be taken and papers to be written. Parents trust us to continue that enterprise, but also do it in a safe way.”

“Each day that their kids come home, and they’re learning and they’ve had another successful day of social distancing and so forth, I think that trust builds.”

It’s also further evidence that, while there are many variables to contend with when dealing with the pandemic, Catholic schools in the diocese continue to present a rigorous learning environment that encourages students to recognize their full potential. That’s something Watson says goes beyond just preparing a student for a career and to be a good citizen; it’s about growing in relationship with God and pursuing God’s plan for their life.

“We really want students to learn how to be fully alive in the world, and everything we do in school I think helps them do that. We help students live rich lives with purpose, and that purpose is more than a checklist of what you might call material or secular success,” he says.