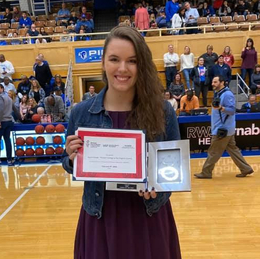 Star Athlete
SUSAN GLADE
MOUNT LAUREL
Glade, a student at Rowan College at Burlington County (RCBC), received the Woman of the Year award from the New Jersey Association of Intercollegiate Athletics for Women’s National Girls and Women in Sports Day. The award is given to one woman from each college and university in the state and recognizes athletic excellence, community service and academic success. Glade, who grew up in Alaska, is the starting first baseman for the RCBC softball team and a biology major.

Star Team
WASHINGTON TOWNSHIP BOYS BOWLING
Washington Township captured the Group IV state championship and the Tournament of Champions title on a memorable day at Bowlero in North Brunswick. The Minutemen, who qualified for states as a wild-card entry after placing third at sectionals, beat out 14 other Group IV teams for the state crown. They moved on to the Tournament of Champions and defeated Warren Tech in the semifinals and Jackson Liberty in the final. The two titles were the first for the Minutemen since 2010. Marcus Spann’s high game of 279 was the third-best score on the day, and other key bowlers included Steven Spino, Troy Clifford, Joshua Dicks, Jason Aquino and David Libby.

Danyle Heilig announced her retirement as the field hockey coach at Eastern after a legendary career in which she built the Vikings into one of the premier programs in the nation. Heilig led Eastern to the Group IV state championship in all 21 of her seasons at the school, and the Vikings finished as the No. 1 team in the country nine times. Combined with her one season as coach at Haddon Heights, she compiled an overall record of 526-16-10.

Andrew Gostovich, a senior on the Haddonfield boys basketball team, broke a school record by hitting 10 3-pointers in a win over Gateway. He finished with a career-high 32 points and beat the old mark of nine triples in a game, shared by Blake Wilson and Greg Steinberger.

Clearview girls basketball player Bella Steidle followed in her mother’s footsteps by joining the 1,000-point club. The senior reached the milestone on a 3-pointer in a win over Delsea, becoming the sixth player in program history to hit the number. Her mom, April (Auer) Steidle, accomplished the feat as a star player at Washington Township.