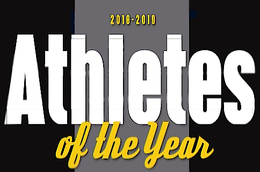 2018-2019 Athletes of the Year
Using a combination of natural talent and sheer will, these 10 local competitors found a way to shine in the biggest moments.

One of our favorite jobs here at Suburban Family— and also one of the most difficult—is putting together our annual list for Athletes of the Year.

South Jersey continues to be blessed in each season with outstanding competitors who amaze us with their speed, skill and grace under pressure. The hard part is, there just are not enough spots to honor all of the local athletes worthy of recognition.

After much internal debate and serious consideration, we finally whittled down this year’s crop to a final group of 10 that includes a record-setting lacrosse player, a pair of state champion soccer players, one of the best wrestlers in South Jersey history and more.

We are proud to present the 2018-2019 Athletes of the Year in alphabetical order.

ANNIE BEHM
Cherry Hill East
Just two seasons into her high school swimming career, Behm has already left her mark on the renowned Cherry Hill East program. This winter she claimed her first individual state championship, winning the 100 backstroke with a time of 55.36 seconds. She also took sixth in the 200 freestyle and helped the Cougars’ 200 medley and 400 free relays place second. Last summer, Behm competed at Junior Nationals and finished seventh in the 200 backstroke, and she was later chosen to participate in USA Swimming’s National Select Camp.

NICK CARTWRIGHT-ATKINS
Moorestown
An ardent fan of comic books and Marvel movies, Cartwright-Atkins has played the role of hero during all three seasons for Moorestown this year. A record-setting wide receiver in football, he is shining as a sprinter and hurdler for the Quakers’ track team this spring. But his most memorable campaign came with the basketball team, as he led the Quakers in scoring and rebounding to help them post a 28-6 record and win the program’s first state championship since 1959. Cartwright-Atkins will continue his athletic career at Wagner College, where he will focus on football.

ALIYA RAE GAROZZO
Paul VI
Last spring was a breakout season for Garozzo, a Paul VI track star who rose to the occasion time and again as a sophomore. After winning a sectional title in the 400 hurdles with a blazing time of 1:02.37, she went even faster at states, capturing the crown in 1:01.46. Garozzo went on to place third at the Meet of Champions in 1:01.41. Now a junior, Garozzo has already won the Camden County championship in the event and expects to be in contention at sectionals and states as well.

GABE KLAUS
Haddonfield
The Haddonfield football team put together a magical season last fall, and Klaus was right in the middle of it. He was the starting tight end on offense but especially made a difference on the other side of the ball as a defensive lineman, recording 88 tackles and 10 sacks to help the Bulldawgs go 130 for the second undefeated season in school history. They also won their fifth sectional title in nine years. During wrestling season, Klaus competed at 220 pounds and secured the second district crown of his career and placed third at regions.

KELLI MCGROARTY
Eastern
As the daughter of longtime Eastern girls soccer coach Jamie McGroarty, Kelli grew up around the program and was even a ball girl on the 2006 state championship team. This past fall she was once again a part of a state title team, but this time she played a leading role. A junior midfielder, McGroarty set a school record with 37 goals, the last one coming in a 1-0 win over Bridgewater-Raritan in the Group IV state final. She was rewarded with New Jersey Player of the Year honors. Also a starting guard for the Eastern girls basketball team and the goalie for the Vikings girls lacrosse team—which has sectional title hopes this spring—McGroarty is committed to La Salle for soccer.

RENNA MOHSEN-BREEN
Moorestown Friends
After years of knocking on the door, the Moorestown Friends girls tennis team earned its first state championship this past fall, and Mohsen-Breen was a major reason why. The junior first singles led the Foxes to their eighth appearance in the final and sparked a 3-2 win over Newark Academy for the title. On an individual level, Mohsen-Breen won the South Jersey Coaches Association Tournament and captured her third straight Burlington County crown. She also advanced to the quarterfinals of the state singles tournament, where she suffered her only loss of the season in three sets.

LILLO PAXIA
Gloucester Catholic
Gloucester Catholic has seen its share of elite hitters during its remarkable baseball history, and Paxia will certainly be mentioned among the all-time greats when his career winds down this spring. A starter since his freshman year, he batted .612 with three home runs and 32 RBIs last season as a junior to help the Rams win their second straight state championship and the 19th in program history, a New Jersey record. This year he is leading the team in hits, RBIs and runs as Gloucester Catholic is again among the top teams in the area. Paxia is committed to Florida State but could be selected in the MLB Draft in June.

LUCAS REVANO
Camden Catholic
Perhaps the only thing harder in New Jersey high school sports than winning an individual state championship in wrestling is doing it two years in a row, but Revano did so in March to cap an epic career at Camden Catholic. In the final match of this year’s state tournament in Atlantic City, the 145-pounder pinned DePaul’s Ricky Cabanillas in overtime in a battle of previous state champions. Revano became the storied program’s second two-time champion and finished his career with 157 wins, second on the all-time list at Camden Catholic. He also earned four district and four region titles and will continue his career at Penn.

CASSIDY SPILIS
Seneca
Spilis, a four-year standout on the Seneca girls lacrosse team, is known for putting the ball in the net, and rightfully so. She was seventh in the state last year with 100 goals, and this season as a senior she became the all-time leading scorer in Seneca and Burlington County history when she netted her 321st career goal. But the midfielder is more than just a scorer, as she also dominates on draw controls, racks up ground balls and is strong at the defensive end of the field. She is hoping to lead the Golden Eagles to a long playoff run before moving on to Rutgers.

CHAD YATES
Washington Township
Coming into his senior soccer season at Washington Township, Yates had already been part of two sectional championship teams, scored plenty of goals and earned player of the year honors. His sole mission was to lead the Minutemen to a state title, and that is exactly what he accomplished along with best friends and longtime teammates Jake Logar, Brett Guetens and Arturo Serano. Yates had 26 goals and 11 assists as Washington Township posted a 25-1 record and defeated Morris Knolls in the Group IV state final. He was named the state Player of the Year and will continue his career at Rowan.