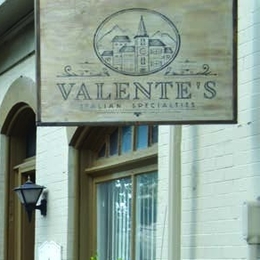 From the Kitchen to the Community
Valenteâs Italian Specialties brings Old World flavors to downtown Haddonfield.

Immersed in the Italian kitchen from a young age, Marcello De Feo says that one day opening a place of his own has been his plan for essentially his entire life. He is finally seeing that dream come to fruition with the grand opening of Valente’s Italian Specialties, a new and eagerly anticipated addition to the Kings Court storefront.

As a child, De Feo cooked side by side with his mom and his nonna, both Italian immigrants, making delicious biscotti and pasta dishes from scratch. By age 11, he was working in restaurants, eventually putting in 90-hour weeks—which he says was both exhausting and totally fulfilling. By the time he was a teenager, De Feo had already developed a menu for his future restaurant. And yet, “somehow,” De Feo says, he “ended up in IT.”
Born and raised in Philly, De Feo made  his way out  to Colorado for a couple years after college. Upon returning to the City of Brotherly Love, De Feo says he was a bit shocked  to see that the “restaurant scene had exploded.” There didn’t seem to be a place for another restaurant. But instead of giving up on his dream, De Feo adapted it. Having lived in Haddonfield for the last decade, De Feo has witnessed a growing need for a specialty Italian market—and that’s what he decided to create.
“Valente’s isn’t about me,” De Feo says of the shop. “This is about family traditions and  about legacy. I lost my mother to cancer in 2004 at the age of only 57. I always knew I would do something to pay tribute to her. My n onna, who had lived with us my entire life, moved back to Italy after my mother died and lived into her mid-90s. She passed away in late 2016. When that happened, I decided I would no longer let roadblocks get in my way of opening up a food business to honor their memories.”
A father of two—Liliana and Nino—De Feo says that Valente’s (which is his mother’s maiden name) is also for his children. De Feo suffers from a rare genetic disorder called Peutz-Jeghers, which ultimately led to his mother’s early death. He says that his “own mortality” is always at the forefront of his mind. His hope is to leave a thriving business to his children that will not only be a family legacy but De Feo says “will support them when I’m no longer here.”
While Valente’s storefront is new, the business is already well-known in the area. Working as a mobile vendor for more than a year, De Feo says they had been selling their Italian specialties at up to eight different farmer’s markets. Some of the top sellers have been the chicken meatballs—made with fresh ricotta and lightly pan-fried—as well as the fresh figs with mascarpone and honey.
“We use as many local ingredients as we can in all of our dishes,” De Feo says. “For instance, we source the honey from local farmer’s markets.”
In addition to selling fresh  pastas, cheese, bread and other ingredients, De Feo says the shop will also sell freshly prepared, grab-and-go meals that “won’t cost you an arm and a leg.”
“People in town here love good food and are very health conscious,” De Feo says. “But they’re also very busy. I want to be able to provide a place where you can grab  a fresh meal to feed your family between picking th e kids up from school and taking them to soccer practice.”
Valente’s will also provide catering services f or parties, weddings, corporate events and more. And, De Feo says he plans to host a variety of classes, including  a “wine and dine class.”
“The idea is that we’ll come to your house for a gathering with your friends,” De Feo says. “We’ll bring all th e fresh ingredients and teach you how to make a dish or two. And then we’ll cook you a complete meal, and clean up afterwards, while you enjoy a delicious dinner with  friends.”
De Feo also plans to do kids classes, including the pasta-making camp he’s hosting for the last week of August. Previously, he had already taught a popular “Playing with Pasta” class as part of  Elizabeth Haddon’s Noontime Enrichment program and hopes to run that class again this year.
In addition to being about family, De Feo says Valente’s is about community, and  he’s grateful for the way in which his business has already been embraced.
“I’m not in this to win awards or become a famous chef,” De Feo say s. “Italian food isn't like the stereotype of French food. It's not about being lavish or decadent. It’s about simplicity, fresh ingredients and food that brings people together. My goal is to make as much good food as I can and to become a shop that is a staple of t he community.”
Valente’s Italian Specialties
7 Kings Court | Haddonfield
(856) 298-1937 | Valentes.us
Published (and copyrighted) in Suburban Family Magazine, Volume 9, Issue 6 (August 2018).
For more info on Suburban Family Magazine, click here.
For information about advertising in Suburban Family Magazine, click here.
To find out where to pick up your copy of Suburban Family Magazine, click here.