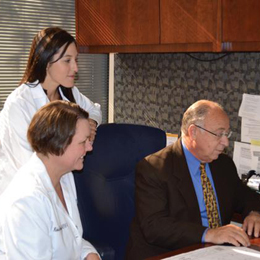 IN THIS DAY AND AGE, FERTILITY TECHNOLOGY HAS GROWN BY LEAPS AND BOUNDS, thanks to procedures including in vitro fertilization (IVF), in vitro maturation (IVM) and preconception genetic screening (PGS). Despite these advancements, the causes that lead to infertility have not been completely elucidated and diagnoses such as unexplained infertility are still prevalent. Additionally, and maybe because of lack in understanding the underlying causes of infertility, there is an increasing rate in severe maternal morbidity and maternal mortality, which is the negative impact a pregnancy or childbirth can have on a woman’s well-being.

The CDC states more than 50,000 women in the U.S. are affected every year with negative impacts during a pregnancy that include anemia, hypertension, gestational diabetes mellitus or hyperemesis gravidarum. As for maternal mortality in U.S., it has doubled since 1990, unlike in other industrialized countries where it constantly decreases. The CDC reports this increases steadily due to recent trends such as an increase in maternal age at first birth, pre-pregnancy obesity and pre-existing chronic medical conditions. Those trends are compounded by an increasing rate in cesarean delivery.

“From all these things that we’re observing, the importance of pre-pregnancy health that affects the pregnancy and its outcome became apparent, as was the need for preconceptual care," explains Dr. George Taliadouros, president and CEO of Delaware Valley Institute of Fertility & Genetics, whose facility is leading the charge in personal fertility care.

“The proportion of women who become pregnant at 35 years old or older has tripled since 1980,” he adds. “When women make a decision to postpone pregnancy for several social and personal reasons, they also have to take into consideration and account that when theyl try to become pregnant, they might have difficulties.”

As recent studies have found, Assisted Reproductive Technologies (ART) can help half of the women between ages 30 and 35 and about 30 percent of those between the ages of 35 and 40. Driven by the desire of achieving their goal, physicians and patients alike try advanced treatment methods that could present the possibility of multiple pregnancies (two to five), which in turn could lead to preterm babies or low birth weight. “If they’re more than 30 years of age, the likelihood of multiple births doubles,” Dr. Taliadouros states. “Above 35 years of age, the risk quadruples and over 40 is seven times that.”

As far as obesity goes, Dr. Taliadouros explains, “There are several studies that have shown that the pregnancy rate decreases and live birth rate decreases as the weight or the BMI increases. … Obesity affects the quality of the eggs, which in turn, adversely affects the embryo development, implantation rate and the pregnancy outcome. Unfortunately, this risk starts very early, if an adolescent is obese, her risk of not becoming pregnant [later in life] increases three times and the risks of not having a baby is four times.”

Despite the difficulties in fertility, Dr. Taliadouros credits his facility in aiding couples by doing what most doctors don’t often do: identify the medical cause in infertility. “What we're doing here in our facility is to address the underlying medical issues before pregnancy is achieved because I think that’s the important and smart thing.

“The other approach that exists, and it’s widely implemented in women who have an ovulatory problem like Polycystic Ovary Syndrome (PCOS), is to initiate infertility treatment. No attention is paid to the underlying cause and no effort or time is invested to correct it, which might cause problems during pregnancy or the child,” he adds. “For instance, if you have a woman with the problem of ovulation, she has an 80 percent chance to develop gestational diabetes during the pregnancy and the premature delivery increases by 36 percent.”

While Delaware Valley Institute of Fertility & Genetics offers a gamut of fertility treatments, including a successful IVF program, SEEDS (semen, embryo and egg depository and storage), which to date, led to 11 babies born to cancer survivors, and an egg donor program—which at the time, was fifth in the country—Dr. Taliadouros prides his facility in first correcting the issue that’s preventing a woman from having a successful pregnancy.

That includes pre-existing chronic medical conditions, which Dr. Taliadouros says is crucial to address prior to a pregnancy, rather than let it go undiagnosed during a pregnancy. “The smart thing is to correct [it], find what is the underlying problem, why they cannot become pregnant and address [it] and then let them become pregnant on their own,” he states. “If you don’t correct the problem and you’re not successful and you force the pregnancy, then the problem leaves the fertility doctor and goes to the obstetrician, gynecologist and the pediatrician.

To combat this, Dr. Taliadouros prescribes a healthy metabolism and lifestyle as a means to help couples remain fertile. “Go to the doctor to make sure they’re examined properly and everything has been checked before they become pregnant because the reproductive system is made not to fail,” he explains.

”If someone cannot become pregnant, there’s a problem and the problem is not fixed by forcing the system to work, but by correcting the underlying problem. … I advise the treatment for fertility should not be dictated by a frustrated patient or a frustrated doctor. but an educated doctor and an understanding patient.”