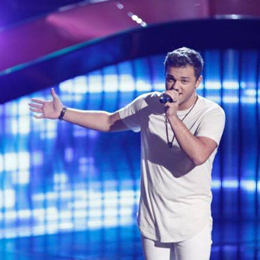 Originally finding his love for music with guitar lessons at a South Jersey church—which he was not great at—Coyle became intrigued by singing. Finding that singing helped calm his physical tics from Tourette syndrome, he became confident enough to perform professionally, which led him to a chance on NBC’s The Voice.

At the blind audition, Coyle sang NEEDTOBREATHE’s “Happiness” and had Blake Shelton’s chair turn at the last few bars noting his passionate voice. Once joining Team Blake, Coyle went to the “Battle Round” with teammate Aliyah Moulden singing a “Walking on Sunshine” duet. Shelton declared Moulden the winner of the battle which meant Coyle would be sent home, but Alicia Keys stole Coyle for her own team.

Singing Imagine Dragons’ “Demons” in the “Knockout Round,” Coyle unfortunately lost to teammate Anatalia Villaranda, who sang Carrie Underwood’s “Two Black Cadillacs.” Although he may not be on The Voice any longer, we are still turning our chairs to see what Coyle will do in the future.