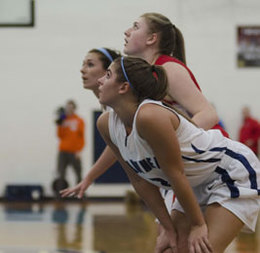 There isnât a whole lot that Lisa Gedaka hasnât accomplished on the basketball court. A former star player at Gloucester Catholic and Villanova, she has been the head coach at her alma mater for 25 years and won more than 500 games with the Rams, just the third girls basketball coach in South Jersey history to reach the milestone.

The one accomplishment thatâs eluded Gedaka during her coaching career has been a sectional championship, although Gloucester Catholic came close the last two years, losing each time in the South Jersey Non-Public A final. The good news is that sheâll have another good shot the next two years thanks to a player she knows better than anyone.

Mary Gedaka, Lisaâs daughter and a junior forward, has emerged as one of the top players in the area. Last season, she was named all-South Jersey first team after averaging a team-high 17.1 points and 9.6 rebounds.

Sheâs joined by junior guard Maggie McIntyre, who hit 61 3-pointers last year and averaged 11.2 points per game. Senior forward Kennedi Thompson is also back, and the Rams welcome in two sophomore transfers who both started at Wildwood Catholic in Danielle Sanderlin and Naiyana Sabb. That nucleus should keep them among the elite teams in the Tri-County Conference and South Jersey.

One of Gedakaâs former players has also made a name for herself in the coaching ranks.

Chrissy McGovern led Shawnee to a sensational campaign in 2014, as the Renegades went 26-5, won South Jersey Group IV for their first sectional title since 1999 and reached the state final for the first time in program history.

Camden Catholic also had a special season in 2014, as its 23-5 record included impressive wins over Rancocas Valley, Washington Township and Gloucester Catholic.

The Fighting Irish return a trio of junior starters in Julia Braungart, Sierra Taylor and Tialah Thornton, all of whom have played varsity since their freshman year.

The Minutemaidsâ division rival, Lenape, also must regroup after losing three starters from a team that went 20-7 and reached the South Jersey Group IV final. The difference is that the Indians return a proven star in leading scorer Maddie Sims, a 6-foot-3 junior who averaged 12.5 points.

Those schools will be challenged in the Olympic American by Cherokee, which returns almost the entire roster from a 14-11 team that lost a close game to Shawnee in the Group IV quarterfinals. Sophomore Isabella Therien had a terrific freshman season, as she led the Chiefs with 14 points per game and was named to the all-conference first team and all-county third team.

Eastern has no seniors but a lot of young talent, including freshman Leah Manchel. The Vikings have been a playoff team in 12 of the 13 years that coach Joe Murphy has been guiding the program and will look to continue that success.

Bishop Eustace went 5-16 in a rebuilding season, but four starters are back, including all-conference first-team forward Alexis Santarelli, a junior.

Paul VI welcomes in a new coach in former Highland star Lisa Steele, who has been an assistant at the college level. Sophomore guard Aliyah Stephens averaged a team-high 14.3 points as a freshman and is a top returner for the Eagles.

In the Colonial Conference, Haddonfield is also turning its program over to a former terrific player. Jackie Mulligan, a standout at Sterling and Penn State, also coached Sterling to the Tournament of Champions title in 2000 to highlight her six-year tenure there.

At Haddonfield, she inherits a 17-11 team led by junior guard Taylor Sehdev. Also back are two sophomores who saw significant varsity playing time as freshmen in guard Meghan Smart and center C.C. Mooney.

Kingsway looks like one of the top Tri-County Conference teams thanks to leading scorer Zoe Hahn, who averaged 12.7 points and six rebounds per game. The starting backcourt of junior point guard Renee Hersperger and senior shooting guard Tiana Morgan also returns for the Dragons.