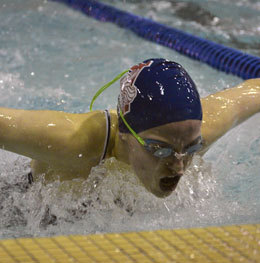 Cherokee lost its first two meets last season and was just a .500 team near the end of January. But by the middle of February, the Chiefs had found their way and captured their first sectional title since 1983, defeating Clearview for the South Jersey Public A championship.

Many of the key performers from that team return, including senior Isabel Obregon, who took eighth in the backstroke and 14th in the 200 free at states and has committed to Cornell.

Senior Morgan Sage and sophomore Jamie Bowne are other important returners for Cherokee. That talent, along with the experience gained from last yearâs playoff run, should take the Chiefs a long way.

Clearview will again challenge for the sectional A title thanks to one of South Jerseyâs top swimmers in senior Marissa Moskalow, who took third in the state in the IM and fourth in the breaststroke. She also took first in the IM at the SJISA, Tri-County Conference and Gloucester County meets, setting a county record.

After losing to Ocean City in the South Jersey Public B final in 2014, Haddonfield has the talent in place to possibly win the programâs 12th sectional title, although the Bulldawgs will now be competing in the newly formed Public C.

They are paced by junior Sophie Fontaine, one of the best freestylers in the area who took seventh in the state in the 200 free. State diving champion Sophia Peifer, who was also the South Jersey champ, leads a tremendous sophomore class that also features Abbey Neveling, Sophia Kurtz and Abigail Bentley.

Phenomenal senior Carter Orth headlines a strong Moorestown team that reached the South Jersey Public B semifinals last season. Orth placed fifth in the butterfly and sixth in the IM at states and was the champion in both events at the Burlington County Swim League Open.

Cherry Hill East has a solid nucleus returning from a squad that went 9-2 and suffered a two-point loss to Clearview in the South Jersey Public A semifinals. Keys swimmers include senior Mackenzie Ropka and sophomores Katie Doyle and Lauren Kerner.

Cherry Hill West graduated a pair of fantastic swimmers in Erin McBride and Jenna Zagoren from a team that reached the Central Jersey Public A final. Among the key returners are junior freestyler Madison Franke and senior diver Madeline Kemner.

Shawnee also said farewell to pair of standouts in 2014 graduates Julianna Foss and Kacie Dunham. Seniors Renee Russo and Melissa Manuelli joined Foss and Dunham on the medley relay team that finished fifth in the state and lead the list of returners.

Bishop Eustace went 7-3-1, reached the South Jersey Non-Public A semifinals and won a division championship, and will look to keep the momentum rolling behind a super sophomore class led by Alexandra Nachodsky.

Gloucester Catholic can always be expected to send out a competitive team, and this year should be no different. Their top returner is senior Olivia Cann, and a loaded freshman class will also contribute.

Eastern made big strides last season, qualifying for the South Jersey Public A playoffs and finishing seventh in Division A at the SJISA Coaches Invitational. A big reason was the emergence of Kayla Gagnon (pictured) and Kendall Bromley, who will look to build on impressive freshmen seasons. Gagnon took fifth in the IM and seventh in the butterfly at the SJISA meet, while Bromley added top-10 finishes in the 500 free and breaststroke.

Kingsway has its own dynamic duo in the sophomore class. Sydney Jaramillo was the Gloucester County and Tri-County Conference champion in the butterfly and took second in the event in Division A at the SJISA Coaches Invitational. She also placed second at SJISA in the IM and has a promising future at Kingsway. Samantha Armano, meanwhile, was second in the county and third in the conference in the IM.