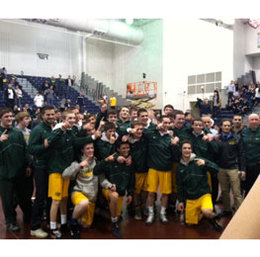 When you think about South Jersey wrestling powers, schools like Paulsboro and Delsea stick out. Much further down the list is Clearview.

Before last season, the Pioneers had just one division title in the history of their program. They had never won a sectional crown, let alone a state championship. But that all changed in a magical 2014 campaign, as they went 27-1 and cruised to the Group III state title. Now they’re eager to see if they can do it again.

Junior Mike VanBrill is another stud returner who went 31-3 at 126 pounds, and was joined at states by senior 170-pounder Joe Sindoni. Other key returners are seniors Kyle McMahon and Gary Searle, both district champs.

Clearview (pictured) is now in Group IV—a fifth classification group was also added by the state this year—but with the talent the Pioneers have, it wouldn’t be a surprise to see them making another deep playoff run.

Clearview’s Tri-County Conference rival, Kingsway, has also moved up to Group IV after losing to the Pioneers in last year’s South Jersey Group III final. The Dragons have 11 starters back, including junior Stanley Atkinson, who was a district champ and region runner-up at 126 pounds and finished with a 29-6 record. Trace Kinner (32-5) was a state qualifier at 106 as a freshman, and junior Rory Bushby was a district champ at 145. Newcomer Quinn Kinner, a freshman, should make an instant impact at 106.

In the Colonial Conference, Haddonfield has 10 starters back, including state qualifier Frank Fortino and district champ Jake Klaus. Fortino, a junior 220-pounder, went 29-11 last year, while Klaus went 28-10 at 145 and will likely wrestle 152 as a senior. The Bulldawgs reached the South Jersey Group I semifinals and will compete in Group II in 2015.

Moorestown, a member of the Burlington County Scholastic League, features one of the best 220-pounders in the state. Senior Tyreek Smith, who will be seeking his fourth district crown, went 37-7 last year, won a Region 7 title and placed eighth in the state for the second straight year. The Quakers have a lot of talent surrounding Smith, including junior Max Rohan, a district champ at 113 pounds, and senior 170-pounder Anthony Williamson, who went 33-7.

In the Olympic Conference, perennial power Camden Catholic is coming off a 15-15 season. The Fighting Irish lost in the Non-Public B state final, ending their streak of 10 straight state titles. They’ll look to start a new streak behind outstanding junior Mark McCormick, who went 38-6 and finished fourth in the state at 132 pounds. McCormick, who figures to move up to 138, also won his second straight Region 7 crown to go with his District 27 title.

Eastern figures to improve on a 10-16 record thanks to leaders like senior Brock Worrell, who went 32-4, was a district champ and took third in the region at 145 pounds. Junior Brandon Barbella joined Worrell as a state qualifier at 120 pounds and finished with a 30-7 record.

Cherokee has eight starters back after winning the team title at District 27, including a pair of district champs in sophomore Shawn Webb, who went 23-17 at 106 pounds, and junior Conner Cosgrove, who went 28-13 at 113.

Cherry Hill West must replace several key wrestlers after a 23-4 season in which it qualified for the playoffs for the second straight year and reached the sectional final for the first time. But the Lions return a solid foundation in juniors John Gibson, Connor Rogovich and James Potts.

Lenape graduated a pair of district champions, but brings one back in senior 160-pounder Kyle McIntyre, who also qualified for states with a second-place showing at regions and finished with a 23-5 record. Shawnee also suffered heavy losses to graduation, but one of the key returners is senior Dylan Hunt, a region qualifier at 106 pounds.