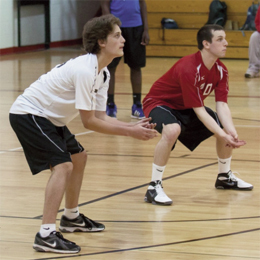 Cherry Hill East
COUGARS
PLAYERS TO WATCH: Senior outside hitter Mike Monczewski is an important player both offensively and defensively and leads the returners for Cherry Hill East. The 6-foot-4 Monczewski was second on the team with 149 kills and 51 blocks as a junior and made the all- conference second team. Senior setter Sidhant Subramanian joined him on the all-conference second team after recording 441 assists and 115 service points. Senior Eric Kim is another returner expected to contribute.

OUTLOOK: The Cougars hope to improve on last year’s 11-10 record and return to the playoffs with Monczewski leading the way.

OUTLOOK: The Lions made big strides as a program and finished with a 7-15 record in 2016. Look for the progress to continue this season.

Clearview
PIONEERS
PLAYERS TO WATCH: Senior Ryan Miller has high hopes for his final season at Clearview after leading the team with 154 kills and making the all-conference second team last year. Senior Jake Riddel returns as the starting setter after recording 258 assists, and other valuable veterans are senior middles Pierce Burgin and Dylan Regan. Sophomore Minh Christensen is an experienced libero and other returners are seniors Anthony Gross and Carl Pape and sophomores Jack McEvoy and Dylan Beer.

OUTLOOK: The Pioneers were in rebuilding mode last year with a roster full of varsity newcomers. They got better as the season went on and should continue to improve in 2017.

Eastern
VIKINGS
PLAYERS TO WATCH: Eastern graduated three all-conference players and will have a lot of new faces in the lineup, but one talented returner to build around is junior middle Kasso Peaks. He was second on the team with 149 kills and 91 blocks as a sophomore and will be asked to step into a leadership role this season. Senior outside hitter Anthony Iuliano joined Peaks on the all-conference second team and will be counted on as well. Other returners who will contribute are seniors Josh Gershenfeld, Sahil Patel, Andrew Thomas and Eddie Taufer, along with juniors Isaac Sklar and Prem Shah.

OUTLOOK: The Vikings went 21-5 overall and unbeaten in the Olympic Conference American Division on their way to the division title for the third year in a row. They also reached the South Jersey semifinals. Although several of their top players graduated, expect them to remain in the division hunt.

Kingsway
DRAGONS
PLAYERS TO WATCH: Although Kingsway graduated a pair of outstanding two-way players in Jack Wiscount and Jeremy Otten, there is still a lot of talent in the program. Junior outside hitter Jake Martin had 222 kills and made the all-conference second team as a sophomore and will look to carry the offense. He’ll have a great asset in junior setter Chris Morehead, a terrific passer who was fourth in the state with 829 assists and joined him on the all-conference second team. Junior middle Narpinder Singh (120 kills, 66 blocks) and senior opposite Nate Sammartino (57 kills) are other key returners. Junior Evan Vuong will look to take over as the starting libero and senior Mitch Burnham is an experienced middle.

OUTLOOK: The Dragons went 27-10—setting a school record for wins for the second year in a row—and earned a share of the Olympic Conference Patriot Division title before falling in the South Jersey quarterfinals. Expect another successful season against a challenging schedule.

Moorestown
QUAKERS
PLAYERS TO WATCH: Moorestown graduated a solid senior class last year that included top all-around player John McGinley. The good news is that there are several experienced players back in the fold, including senior setter Jaxon Atkinson, an excellent passer. With most of the leading attackers from last season gone, returners like senior Marco Randazzo and juniors Chantz Williams and Will Eaise will look to step up offensively. Other contributors include seniors Pat Smith and Andrew Aggresto and junior Peter Wajda.

OUTLOOK: The Quakers have some big spots to fill from a team that finished 14-17 last season. They hope to make progress throughout the year and remain competitive.

OUTLOOK: The Eagles’ solid 2016 campaign included a 13-13 record and a berth in the South Jersey playoffs. They will look to rebuild around a new core and keep the program headed in the right direction.

St. Augustine
HERMITS
PLAYERS TO WATCH: Senior outside hitter Brent Jarman, one of St. Augustine’s leaders in kills last season, is part of a talented core. Senior Kyle Griffiths is back as the starting setter and other seniors are opposites Nick DiNunzio and Brian Keller. Junior opposites Nick Pilny and Paul Biagi both contributed as sophomores and will be counted on as well.

OUTLOOK: The Hermits hope their strong senior class can help them contend for a winning season after finishing 7-15 in 2016.

Washington Township
MINUTEMEN
PLAYERS TO WATCH: Washington Township said goodbye to a strong senior class that placed three players on the all-conference team. The top returner is senior outside hitter Brian Proferes, a captain last year who was second on the team with 134 kills. Raj Patel and Brendan Hopkins are other senior leaders, and juniors Luke Molnar and Matt Brien should assume bigger roles.

OUTLOOK: The Minutemen’s impressive 14-6 season included a playoff win and a berth in the South Jersey quarterfinals. They’ll look to keep the momentum going behind Proferes and a new varsity lineup.

To see all of the spring volleyball schedules, click here.