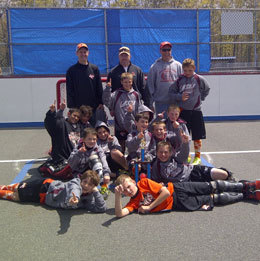 Bob Long
Marlton
The Marlton Chiefs Street Hockey Penguin A Division team won the title at the National Street Hockey Association Championships under the leadership of Long (pictured). The boys edged Gloucester Township in the final, 1-0, and went 34-8 on the season. Longâs squad entered seven tournaments and reached the final in six of them, winning two.

Wallace Pickard
Shamong
Pickard, the head coach of the Seneca Lacrosse Clubâs U-9 boys team, led his squad to an undefeated spring season in the South Jersey Youth Lacrosse League. The boys also captured first place in their division at the Thunderbolt Tournament. Pickard challenged his kids to become better players while keeping a positive attitude at the same time.

Ron Case
Deptford
The long-time athletic director at Gloucester County College, Case was recently recognized as the Under Armour Athletic Director of the Year for two-year colleges at a ceremony in Orlando. Case became the first four-time winner in the 15-year history of the award. During his 22-year tenure, the Roadrunners have won 25 NJCAA Division III national championships. GCC also won the Learfield Sports Directors Cup, given to the top athletic program in the country among two-year schools.

Jeff Blackburn
Mount Laurel
Blackburnâs squad, known as the Orange Crush, claimed the championship in the Mount Laurel Girls Softball Rookie League to cap a perfect season. The Orange Crush finished with a 13-0 record, with four of the wins coming by one run. Blackburn allowed everyone on the team to play each position and constantly offered encouragement to his players throughout the season.

Adam Gerber
Moorestown
Gerber guided the Moorestown U-10 baseball team to the District 4 Cal Ripken championship with a 7-1 win over Delran. It was the third straight district title for the boysâa feat that had never been accomplished in Moorestown beforeâas Gerber also led them to U-8 and U-9 crowns the last two years.

Stefani Kirk
Medford
Kirk, the new head coach of the Shawnee High School girls tennis team, earned her first career victory in the teamâs season opener. A Shawnee graduate and a teacher at the school, Kirk led the Renegades to a 5-0 win over Woodrow Wilson.

Dave Heil and Phil Ratcliffe
Washington Township
Heil and Ratcliffe, the coaches of the Washington Township Storm 12-year-old boys soccer team, guided their squad to the championship at the season-opening Hershey Cup Tournament. The Storm won their four games by a combined score of 15-1 and earned a 2-0 victory over HFC United Black, a Maryland team, in the final.

Jim Villa
Haddonfield
Villa, the coach of the undefeated Wedgewood swim team, led his swimmers to their third straight Tri-County Swimming Pool Association âAâ Division crown after a perfect 5-0 season. The team, consisting entirely of Haddonfield residents, has been undefeated for the past three seasons and set eight team records in the 2013 season alone under Villaâs leadership. Wedgewood capped its outstanding season by taking first place at the 57th Annual Burt German Tri-County Swimming Championships.

Jim Kreston
Gibbsboro/Voorhees
Kreston led the Gibbsboro Post 371 Senior American Legion baseball team, made up mostly of Eastern High School players, to a runner-up finish at the District 3 Tournament. Gibbsboro defeated Gloucester Township Post 281, 5-3, to claim second place and earn a berth in the state tournament. Krestonâs squad went on to finish second at the state tournament, losing to Brooklawn in the final, and moved on to the Mid-Atlantic Regional Tournament.