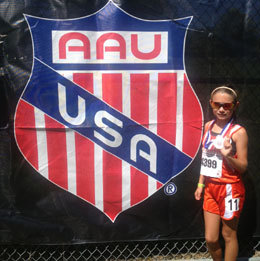 Nicole Clifford
Marlton
A member of the Marlton Recreation Council track and field team, Clifford (pictured) had a terrific showing at the AAU National Junior Olympics in Detroit. She shattered her personal record with a time of 5:51.89 in the girls 9-year-old 1500 meters, as she grabbed the lead with 400 meters remaining and went on to win her heat. Clifford finished eighth overall in the event to earn a spot on the podium.

Marlee Ehrlich
Cherry Hill
A Cherry Hill East graduate and Harvard University sophomore, Ehrlich flew to Israel this summer to compete in freestyle swimming events for Team USA at the 19th Maccabiah Games. One of 16 athletes and support staff members from South Jersey to attend the Games, Ehrlich took home a gold medal and a silver medal. Her sophomore swimming season at Harvard begins in November.

Kyle Borbi
Medford
Borbi, a Shawnee High School senior, spent part of his summer vacation at Disney World as he joined 92 of the nationâs best lacrosse players at the U.S. Lacrosse All-American Showcase. In the championship game of the tournament, held at the ESPN Wide World of Sports Complex at Disney and televised on ESPNU, Borbi had two goals and an assist to lead the Pride to an 11-10 overtime win over the Liberty. The Notre Dame recruit was named tournament MVP after recording 12 goals and nine assists total at the showcase.

Brandon Outlaw
Moorestown
Outlaw once again turned in an outstanding performance at the AAU National Junior Olympics Track Meet, held from July 27 through Aug. 3 in Detroit. Outlaw, a member of the Athleteâs Academy Track Club, took home four medals in the 14-year-old division, making him a 12-time Junior Olympic medalist. Included in that haul was a gold medal in the 4x800 relay, and he also was ranked in the top five in the nation in all of his events to earn All-American honors. Outlaw is currently a freshman football player at St. Augustine Prep and will continue his track career at the school.

Devin Smeltzer
Voorhees
A Bishop Eustace senior and Voorhees resident, Smeltzer was one of 48 players in the country chosen to play this summer in the Perfect Game All-American Classic. The game was held in August at Petco Park, home of the San Diego Padres, and was broadcast live on the MLB Network. A left-handed pitcher for the East team, Smeltzer allowed one run in 2/3 of an inning as his squad lost to the West, 8-6. Despite the loss, the game was a dream come true for Smeltzer, who overcame cancer as a child and is now five years cancer-free as he prepares for his final season with the Crusaders.

Jacob Boris
Tabernacle
A day after his 14th birthday, Boris gave himself quite a present when he became the youngest person to bowl a perfect game at Medford Lanes Bowling Alley. Boris, who has been bowling since he was 5, hit the magic 300 number with his best friend, Evan McNally, looking on. Boris is now a freshman at Seneca and is looking forward to his high school bowling career.

Champion Goldy
Haddonfield
Goldy lived up to his unique name at the National Senior Games, which were held in Cleveland in July. The 96-year-old claimed gold medals in the javelin, discus and shot put in the 90-100 menâs division, and also earned silver medals in the 50- and 100-meter dashes. Goldy, who started competing in track and field at age 70 at the suggestion of members of his church, doesnât plan on slowing down any time soon. His goal is to compete in the 100-meter dash at the famed Penn Relays when he turns 100 years old.

Morgan Leaf
Washington Township
Leaf, a Washington Township resident and senior at Our Lady of Mercy Academy, was diagnosed with juvenile myoclonic epilepsy two years ago after suffering two grand mal seizures. But she hasnât allowed the condition to derail her cheerleading career for her high school and a local club team called the Jersey Pride. While her neurologist prohibits her from being a flyer, Leaf continues to shine, as witnessed by her All-American nomination this summer at a National Cheerleading Association camp. She is also being recruited by colleges for acrobatics and tumbling.

Abby Zane
Medford
Zane, an 8-year-old swimmer for the Deer Brook Bluefish, broke the pool record in the 25 freestyle during a Tri-County League Division A meet against Erlton. Zaneâs time of 15.91 seconds broke her own mark of 16.26 seconds. She also broke the record in the 25 butterflyâset in 1990âwith a time of 17.19 seconds.

Michael Pawlowski and Dylan Rhodes, Marlton
Paul Braungart and Dan Wigley, Medford
These four boys, members of the South Jersey Boys Lacrosse Black Storm, were chosen for the U-15 National Maverick Select Lacrosse Team, which competed at the US Lacrosse Under-15 National Championship this summer in Florida. The tournament was held at the ESPN Wide World of Sports Complex at Disney, and the local players helped their squad post a 3-3 record and finish 12th out of 24 teams.

Paige Lillie, Lindsey Modugno and Brittany Simonka
Mount Laurel
These Lenape graduates were named recipients of the Kevin Dunning Memorial Scholarship, presented by Mount Laurel Girls Softball. The scholarship is given to seniors who have demonstrated outstanding contributions, involvement and skill to the Mount Laurel and Lenape softball programs. Lillie, Modugno and Simonka were presented with their scholarships at the Lenape softball banquet this summer.