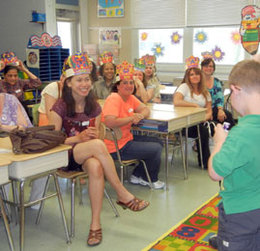 Adventure Aquarium in Camden is encouraging local kids to participate in the “I’m a M.E.S.S.” coloring contest, which runs from May 17-June 30. M.E.S.S. stands for Mighty Endangered Species Supporter and celebrates the comeback of such animals as the American alligator. A worksheet can be downloaded at AdventureAquarium.com, and kids are asked to draw a picture showing how they will support endangered species. Each child who returns a completed worksheet will receive a special button and be entered to win prizes.

Quality education for young children has been a long-standing tradition at Moorestown Friends School, which offered one of the first kindergarten classes in South Jersey in 1883. Today, the school also has preschool and pre-kindergarten classes, and it recently announced that the program has been renamed Beginnings at MFS: The Moorestown Friends School Early Childhood Program. The school is hoping to distinguish itself from other daycares and preschools with its emphasis on academics and its diverse curriculum.

Relay for Life will be holding a number of fundraising events in the area for the American Cancer Society. The following is a list of some of those upcoming overnight festivities to mark on your calendar: May 31, Clearview Regional High School (Mullica Hill chapter) and Eastern Regional High School (Voorhees); June 1, Cherokee High School (Marlton); June 7, Lenape High School (Mount Laurel); and June 8, Freedom Park (Medford) and Veterans Memorial Park (Gloucester Township-Blackwood). Visit RelayForLife.org for more information.

Total number in pounds of clothing collected by Cherokee High School students to be donated to Goodwill. During a month-long competition between members of the Lenape Regional School District, Cherokee dominated the contest for the second straight year, collecting 4,500 pounds more than the second-place school. Together, the school district collected more than 33,000 pounds of clothing.

The round in which former Eastern Regional High School star Logan Ryan was selected in April’s NFL Draft. The Rutgers University cornerback was chosen by the New England Patriots with the 83rd overall pick. Ryan started all 13 games for Rutgers last season and recorded 94 tackles and four interceptions.

Honoring Mom
Stacy Gorodetzer’s second-grade class at Whitman Elementary School in Washington Township held a special Mother’s Day program in which they honored their moms. With the mothers wearing homemade crowns, each student took turns reading a description about his or her mom, including her hobbies and the activities they like to do together. The students also sang a pair of songs and handed out gifts to their moms.

Indian Art
Orchard Valley Middle School parent Riah Sidhwa recently shared some of the culture from India, her native country, with students from the Washington Township school. Sidhwa taught the children about stenciling, a traditional art form used during celebrations and holidays in the Indian culture. Students used the stencils to decorate the school’s courtyard.

Nurses Day
Every year, National Nurses Day is held on May 6 to open National Nurses Week, which ended on May 12, the birthday of Florence Nightingale. This year, Lenape High School used the occasion to pay tribute to its tremendous nursing staff, which includes Gina Emge, Phyllis Hessler and Suzanne Senechal.