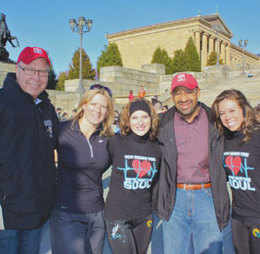 Maria Grasso (pictured)
Mount Laurel
After losing her father and grandfather to colon cancer, Grasso (second from left) resolved to do something. She became executive director for Get Your Rear in Gear Philadelphia. The run/walk marathon in the last four years has raised an astonishing $650,000, making donations to the American Cancer Society and Thomas Jefferson Hospital, as well as other organizations dedicated to helping those with colon cancer.

Brotherfish
Voorhees
A local rock band that usually appears at bars and clubs, Brotherfish earned the biggest gig of its career recently when it played in front of a sell-out crowd at the Wells Fargo Center. Brotherfish defeated four other bands at 94-WIPâs Battle of the Bands and was rewarded with a spot at Wing Bowl 21, the radio stationâs annual wing-eating contest. Founder Tom Yanno and the four other membersâJoe Archible, Andrew Kempa, Dennis OâKeefe and Rob Santa Mariaâusually play cover songs on stage, but they are also currently working on original music.

Edith A. Corbin
Mount Laurel
Corbin was recently named Burlington County Collegeâs Educational Opportunity Fund director. Her most recent position was director of the Education and Health departments for the Metropolitan Wilmington Urban League. She was also the associate executive director of the YWCA in Delaware. The Salem Community College Foundation honored Corbin with the Distinguished Alumni of the Year Award and the Gloucester County Prosecutorâs Office honored her with the Victim Services Award.

Melissa Tucker
Haddonfield
This Moorestown Theater Company student was honored at the 2013 Junior Theater Festival in Atlanta by being named a Broadway Jr. All-Star of their group. Tucker played Ursula in the shortened musical The Little Mermaid, Jr. and performed the song âOh, Bless The Lordâ from Godspell, Jr. with the rest of the all-stars from each group at the end of the festival. Tucker, 15, attends Haddonfield Memorial High School.

Katie Haughey
Medford Lakes
When Haugheyâs younger brother was diagnosed with cancer several years ago, she began to attend Camp No Worries, a program for kids between 6 and 16 who are dealing with cancer in their lives. Inspired to help the program, Haughey began a series of fundraisers, raising more than $300 last summer as part of her Girl Scouts Bronze Award project. The money will go to fund items on the Camp No Worries wish list.

Jack Morgan
Moorestown
Morgan, a Moorestown High School student, won the Freddie G Outstanding Achievement Award at the 2013 Junior Theater Festival in Atlanta. A member of the Moorestown Theater Company, Morgan won his award in the Broadway Junior Slam competition, which brings together students who donât know each other and asks them to perform after minimal practice time. Morgan performed a song from the musical Into the Woods, Jr.

Drs. Leah and Marvin Ziskin
Cherry Hill
Five decades after they graduated from Temple Medical School, the Ziskins were each honored with the universityâs prestigious Laughlin Alumnus of the Year Award for their extensive work in their respective fields of medicine. Founding the Center for Biomedical Physics at Temple, Marvin Ziskin is a pioneer of ultrasound, and Leah Ziskin served on public health boards throughout New Jersey, as well as founding the School of Public Health at UMDNJ in Stratford.

Ann Hastings
Washington Township
A member of the Washington Township Environmental Commission, Hastings organized this yearâs Earth Day celebration for the town. The theme is âRecycling: Up, Down and Aroundâ as they stress different ways to recycle. This is the 23rd year for the festivities.

Amanda Liu
Cherry Hill
Liu, a Cherry Hill East High School student, won a local piano competition sponsored by Jacobs Music Company and affiliated with Symphony in C, a professional training orchestra based at Rutgers-Camden. Liu, who has been playing piano since she was 5 years old, earned an opportunity to perform Camille Saint-SaÃ«nsâ âCarnival of the Animalsâ at Symphony in Câs Concerts for Young People thanks to her victory. She also received a $500 cash prize.

Dorcas Reilly
Haddonfield
Drexel University created an annual scholarship in Reillyâs name, to be awarded to a student who displays excellence in creativity and exemplary behavior in the schoolâs Hospitality and Culinary program. Reilly, a 1947 Drexel graduate and Haddonfield resident, is affectionately dubbed âthe grandmother of the green bean casserole,â as she is credited with inventing the recipe during her time at the Campbells Soup Company.

Aren Duffy
Marlton
A 10-year-old who attends Van Zant Elementary School, Duffy is part of the Moorestown Theater Company. The group recently participated in the Junior Theater Festival in Atlanta and Duffy was named a Broadway Junior All-Star. The group performed a condensed version of Disneyâs The Little Mermaid, Jr., with Duffy playing the role of Sebastian. As one of the All-Stars, he performed in the closing ceremonies.