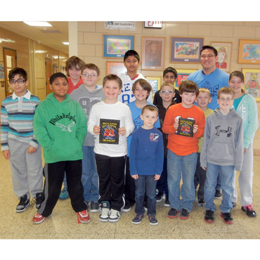 Bells Chess Club (pictured)
Washington Township
As Bells Elementary Schoolâs Chess Club prepared for its first-ever New Jersey State Chess Championship appearance, the club members once again competed in the monthly Princeton Day School chess tournament in February. Bells had the largest representation of any school there, as 14 students competed in three separate sections against 19 other public, private, parochial and chess academies from Central and North Jersey. Bells was the only school from South Jersey present. The Bells Novice 1 team came in first place overall in their section. The Bells Novice 2 team came in second place overall in their section.

Steven Weber, Trevor Wing, Margaret Catrambone and Noah Kernan
Mount Laurel
The National Youth Leadership Forum in Washington, D.C., selected these four JROTC cadets to attend their conference. Weber, Wing, Catrambone and Kernan had the chance to meet students with similar interests and interact with policy makers in the diplomatic, defense and intelligence communities. They also had the opportunity to pose questions to the guest speakers. The high school studentsâ selection was based on academic excellence, community service and the desire to serve our country.

Third-Graders at Taunton Forge Elementary
Medford
These youngsters were honored at a recent board of education meeting for their year-long Helping Hands project. Each child has done a project to benefit a local charity or individual. For example, the whole class made more than 150 bagged lunches for Cathedral Kitchen in Camden. They have also helped Alexâs Lemonade Stand Foundation, Operation Christmas Child, JoJoâs Place, and more. In recognition of the 100th day of school last month, the kids made another 100 lunches.

Madison Stern
Cherry Hill
Cherry Hill High School East senior Stern was recognized as a 2012-2013 Discus Awards Finalist for her accomplishments in the areas of Community Service, Arts and Faith. Stern, currently a student at Midrashah Jewish Junior College where she plans on receiving a teaching certificate, has also volunteered at the Ronald McDonald House and for The Jaffa Institute program, and has also earned the Presidentâs Volunteer Service Award for her hours of service, presented by The Prudential Spirit of Community Awards. She also received an Honorable Mention in the NestlÃ© Very Best In Youth competition for outstanding academic achievement and service to the community.

Ross Cogan, Jayson Borenstein and Matthew Merovitz
Cherry Hill
These 11-year-old boys worked tirelessly to improve the playground at Woodcrest Elementary School, a project they took on on their own. After putting together a presentation for the PTA, they ran multiple school fundraisers and were able to purchase new swings, basketball netsâwhich had been ripped and vandalizedâand a picnic table for the playground. They also spent a Saturday afternoon cleaning up leaves and debris that had been left for years. The district praised the elementary students for their hard work at improving the school for them and their peers.

Isabella Pugliese
Voorhees
An ambitious fifth-grader from Kresson Elementary School, Pugliese approached Principal Stacey L. Morris about starting a student newspaper. This led to her working along with reading specialist Barbara Andrew and a team of 10 other students in order to publish the first edition of Cougar Bytes, Kressonâs first school newspaper, which can be found on the school website.

Leanne Friedman, Anna Slimm, Marc Nation and Rebecca Andrews
Marlton
Musicians really have to impress to win just an audition for the All-State Band, sponsored by the Music Educators Association of New Jersey, but four students from Cherokee were able to go the extra mile during the recent auditions, earning spots in this prestigious selection.?While Friedman and Slimm are new, this will be Nation and Andrewsâ second year in the band.

Mary McCabe
Haddonfield
McCabe and other fellow students at Rutgers â Camden let their fingers do the walkingâand givingâwith knitting needles to accompany them. Their club, Knit 1 Care 2, took on the recent challenge of knitting blankets to donate to Project Linus, a nonprofit that gives blankets to children in need. The club formed last year as a way for this small group of seven students to put their skills to use, handcrafting items for local charitable organizations.

Crystal West and James Gallichio
Washington Township
At Chestnut Ridge Middle School, the annual âYoung Inventorsâ Challengeâ was in high gear on Feb. 25.?More than 40 students participated and worked for a couple of months on their inventions. West won in the seventh-grade category with her invention, the âFlossbuddy,â while sixth-grader Gallichio nabbed first in the sixth-grade category for the âSuper Sand Blaster.â