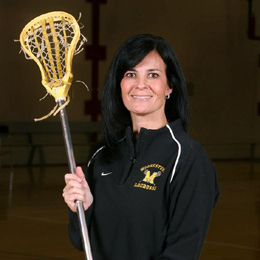 Deanna Knobloch (pictured)
Moorestown
Star coaches across the country were awarded as National Coaches of the Year by the National Federation of State High School Associations (NFHS). Knobloch, the head coach for Moorestown High Schoolâs stellar girlsâ lacrosse team, was one of a select few that had the privilege to accept this award. Knobloch has earned a bit of celebrity, especially after the Moorestown alumni notched her 400th career win last April. She will receive an additional award for this achievement at a special April 14th luncheon held by the NJSIAA and the NJSCA.

Tanya Dargusch
Washington Township
Dargusch, an athletic trainer from Washington Township High School, was inducted into the Athletic Trainers Society of New Jersey on Feb. 24. The schoolâs trainer has 26 years of experience under her belt, and was selected based on her outstanding commitment to athletic health in the school and in her community, including her work in making New Jersey the first state in the United States to require random drug testing.

Mary Ann Stecher
Mount Laurel
For the third consecutive year, Stecher guided Lenapeâs Knowledge Bowl teams to first and second place at the Burlington County Academic Tournament held at the school. In the final match of the day, the schoolâs A1 team with captain Mac Tan and A2 team with captain Anna Wechsler went up against each other, with A1 coming through to earn the win.

Vince Principato
Marlton
Marlton Middle Schoolâs boys basketball coach taught his boys to get used to winning, and theyâre ending their season with the proof. Principatoâs team valiantly rose to the occasion this season with a 16-0 season and a Division League Title. This was the first time in 20 years that the middle school team has made it to the championship round, where they faced off in a championship matchup against Northern Burlington County and clinched a perfect season with a 43-18 win.

Shane Snyder, Jeff Rearick and Mike Petticrew
Washington Township
Head coach Snyder, along with assistant coaches Rearick and Petticrew, led the high schoolâs boys soccer team to victory, earning the South Jersey Group IV championship for the second time in school history. Their soccer team also claimed the Olympic Conference title for the fourth time in the programâs history and went on to the Group IV state semifinals. The team had a 20-4-1 record for the season.

Jim Crawford
Cherry Hill
On Alumni Day at Camden Catholic High School, Crawford was honored for his 700th win leading the boysâ basketball team, becoming one of only three South Jersey coaches to earn 700 career wins. Crawford, whoâs coached the schoolâs team for the last 35 years, joined the prestigious club at the start of this year in a win against Lenape High School.

Jane Topolski and Beverly Fitzpatrick
Mount Laurel
Topolski and Fitzpatrick advised Harrington Middle Schoolâs 7th and 8th grade teams to victory at Holy Cross High Schoolâs regional math tournament. More than 200 competed in the final competition and seven of Harringtonâs team members placed in the leading 16 students, including second-place winner Megan Quimby and third-place winner Saransh Chopra. There were also 50 teams competing and the two Harrington teams were in the final round of competition with one other team.

Mike Sutcliffe
Moorestown
Edison, New Jersey will be the host of the 52nd Annual Hall of Fame Awards Program for the New Jersey Scholastic Coaches Association on April 14, and Moorestown High Schoolâs boysâ soccer coach will be among the select few inducted into the 2013 NJSCA Hall of Fame class. The induction of a coach into the Hall of Fame depends on a history of outstanding achievement in coaching, and Sutcliffe has proved himself worthy time and time again.?

Brad Blumberg, John Deitelbaum and Ed Eichen
Voorhees
These three Voorhees youth soccer coaches were individually selected as honorees by the South Jersey Soccer League. Every year, coaches from across the league are asked to nominate other coaches who have displayed stellar sportsmanship on and off the field, and the past season was clinched by the Voorhees coaches. Blumberg, coach of the U9 Avengers, Deitelbaum, coach for the U10 Comets, and U12 Arsenal coach Eichen have all been honored for their leadership abilities.

Joe Cucinotti
Cherry Hill
As the boys swim coach for Cherry Hill East, Cucinotti helped propel his team to a South Jersey Public A sectional title at a meet held at the Gloucester County Institute of Technology. At the competition, Cucinottiâs team upset the undefeated Shawnee to take the win, breaking a selection of school records and earning a spot at the state semifinals for the fifth year in a row.

Rob Hummel
Mount Laurel
Despite having only one senior on his Lenape High School girls basketball team, Hummel was able to lead his young squad into the top seed of the NJSIAA South Jersey Group 4 playoffs. Hummelâs team faced off and beat Toms River High School at the end of February to earn their spot in the playoffs against Williamstown on March 1, where they lost in a close but well-played match.