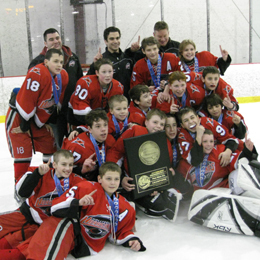 Hollydell Hurricanes PeeWee AA Division (pictured)
Washington Township
After a heated tournament far from home, the Hollydell Hurricanes captured the Pittsburgh Presidents Cup over Presidentsâ Day weekend. The five-game tournament started off with a crushing 5-1 loss to the Delaware Ducks, but that did nothing to slow their game. Instead, the boys came back to win the next three games. They faced off against the home team in the championship game, the Pittsburgh Huskies, and won with a final score of 3-2.

Cinnaminson High School Boysâ Wrestling
Cinnaminson
The Pirates defeated New Egypt to win the Burlington County Scholastic League Patriot Division Conference championship. The match started with an impressive 24-14 lead in the 170-pound division by wrestler Nick Dell-Priscoli, and the score only soared from there, ending with a 36-23 final to take the championship.

Lenape Boysâ Bowling
Mount Laurel
A season of success took the Indians to the NJSIAA South Sectional Bowling Tournament, where they finished second out of 12 Group 4 schools. Because of the win, the team also earned a trip to the state team championships in North Brunswick. Team member Dominic Greisamer placed seventh individually and earned himself an individual seat in the North Brunswick competition.

18U Marlton Insanity Soccer
Marlton
The girls of the Marlton Insanity soccer team came out on top of the High School Girls League this winter, competing against teams from Maple Shade, Mount Laurel and Medford. They won the championship game in overtime thanks in part to a goal by Kelly Bordner.

Medford Memorial Middle School Youth Wrestling
Medford
It was a season to remember for the middle schoolâs youth wrestling team. After an undefeated regular season of 18-0, the team pulled together once again and won the championship title in the South Jerseyâs Middle School Wrestling League at their final tournament in February.

Haddonfield High School Wrestling
Haddonfield
The Bulldawgs have joined a rare club, becoming one of only fives teams in South Jersey to win 600 matches in their history. And the team exceeded 600 by the end of their season, making it to the District 28 tournament with more powerful wins.

Eastern Regional Debate Team
Voorhees
In an exciting turn of events, Easternâs Debate Team ended the South Jersey Debate Leagueâs high school championship game with a tie. Facing off against Cherokee High School, and coming in with an undefeated regular season, both teams scored a 31 in the final match and were rewarded dual championships.

West Deptford Girls Basketball
West Deptford
The green that usually fills the West Deptford High School gym was replaced with a new color in support of womenâs breast cancer research. The Lady Eagles put aside their standard jerseys for a pop of pink during their second annual Play4Kay fundraiser, which raises money for the Kay Yow Cancer Fund. The team raised $2,000 in their first year of fundraising, and are looking to continue a new tradition of helping others.?

Camden Catholic Wrestling
Cherry Hill
The Camden Catholic Irish are officially on an eight-year winning streak after taking the state finals once again with a win against rival DePaul Catholic. The team has clinched either the nonpublic A or nonpublic B title every year since 2004, and has gone on to beat DePaul in the finals four years in a row.

Cherokee Debate Team
Marlton
Head coach Dave Ellis and his team of 25 student debaters took Cherokee High School to a near-perfect season, finishing with a final record of 7-1 in the Douglas Division. Out of the entire team, six students on the team have gone on to compete at a varsity level. They went on to beat Shawnee in the semi-finals, which led them to the championship against Eastern High School, where they tied 31-31.

Moorestown Boys Swim Team
Moorestown
The end of the season gave the boys on this team one last chance to show their strengths in a record-breaking fashion. The Quakers broke a new record for both their school and for the NJSIAA South Division Beat meet in the 200-yard medley, clocking in at 1:37.71 during competition, while placing first in their title and taking down reigning champions Haddonfield in the process.