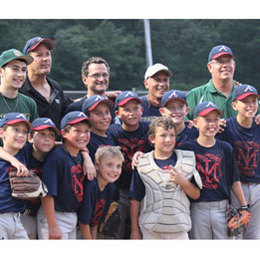 GVAA Vikings Baseball 10U (pictured) and 11U teams
Voorhees
These two teams competed on an international stage during the 2012 Labor Day Weekend in Walt Disney Worldâs Turn Back the Clock Baseball Tournament. The boys faced teams from around the country, the Caribbean islands and South America. Although both did very well, posting 3-2 records respectively, baseball was a small part of the experience. This trip afforded them an opportunity to spend time with teams from around the world. At the conclusion of the tournament, the 10U team (pictured above) swapped jerseys with the Panama RailCats as an international sign of sportsmanship. Their coaches say the lessons in camaraderie will provide these young men with a lifetime of memories.

Cherry Hillâs FC Soccer Phoenix 94 (U18 Boys) and Phoenix 95 (U17 Boys) teams
Cherry Hill
As part of their annual community service project, these two teams banded together to help out at the Travis Manion Foundation 9-11 Heroes Run at Cooper River Park. Phoenix players helped set up and break down the event, staffed water and snack stations for the runners, and provided security detail.

Mount Laurel U14 Flash
Mount Laurel
Before the summer ended, the girls of the Flash had some fierce competition to conquer. The teamâwhich has been playing together for most of their young careersâtook the country by storm at the National Championships in Chicago after winning the Regional Tournament in New York, defeating competition from Maine to Virginia with a shutout four wins. The girls are now ranked 5th in the country.

Washington Township 10U Fall Softball Team
Washington Township
The girls of the fall softball team are the newest South Jersey team to join the fight against pediatric cancer. During Pediatric Cancer Awareness Month, the team donated to Go4TheGoal and purchased $5 yellow shoelaces to wear on Sept. 28 in support of âDress 4 Pediatric Cancer Day.â

Cherokee Girlsâ Soccer
Marlton
Sixty girls from the Cherokee soccer team attended the Bill Bottino Mud Run for Cancer in Millville in September, personally raising $4,620 and winning the award for largest team turnout out of 2,000 runners. Funds raised go toward the Barbara Cook Cancer Foundation, which will split the money for South Jersey Healthcareâs cancer research program and the Livestrong Foundation.

Lenape Girlsâ Cross Country
Mount Laurel
Starting the season off on the best foot, the Lenape Girls Cross Country team captured the championship race at the annual Briarwood Invitational matchup in Philadelphia, besting teams from across the region.

Haddonfield Memorial Girlsâ Tennis
Haddonfield
Haddonfield blanked Holmdel 5-0 in the final round of the Moorestown Classic in September thanks to the efforts of star singles players Taylor Ng, Amanda Lanciano and Victoria Martinez. Chelsea Brown, Erica Pascocello, Arpie Senopoulos and Sylvia Strauss also added to the win in the doubles portion of the competition.

Moorestown High School Girlsâ Tennis
Moorestown
The Moorestown High School girlsâ tennis team locked the title of âchampionsâ again after beating Cherokee in the Burlington County Scholastic League Open; Moorestown has won the tournament every year since it began. Breezy Maravich also held on to her title as the No. 1 singles player.

Cherokee Lady Chiefs and Lenape Lady Indians Field Hockey Teams
Marlton and Mount Laurel
The girls of these two field hockey teams, though typically rivals, teamed together to raise money for breast cancer research. October is Play 4 the Cure month, so the teams played their annual âPlay Pinkâ game on Oct. 9, wearing all pink gear and raising more than $5,000 through T-shirt sales and more.

Cherry Hill East Girlsâ Tennis
Cherry Hill
A strong start to the Cougarâs season has paid off as theyâve drawn the No. 1 seed in the South Jersey Group 4 tournament. They wonât have to participate in a single away playoff game until the possibility of a neutral site for the finals. The team also nabbed spots in the state individual and doubles tournaments.

Bellmawr Girlsâ 10U All-Star Team
Bellmawr
This team, which already went undefeated in two local tournaments over the summer, again went unchallenged in the Deptford Fall Ball Classic earlier this month. The girls recorded a 3-0 record during this most recent tournament.

Medfordâs U14 Girls Shock
Medford
The U14 Shock, part of the Medford Strikers soccer club, won back-to-back tournaments recently. The girls came out on top of the FC Delco Players Cup Tournament as well as the Annual Cherry Hill Tournament. They also placed second in the State Final Cup game.