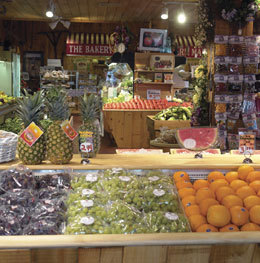 Itâs May, time to think about the seasonâs first bite of juicy Jersey strawberries. When youâre clamoring for that sweet-tart taste, Springdale Farms in Cherry Hill is the go-to place to pick your own, straight from the plants on which theyâre grown. But Springdale Farms co-owner John Ebert has two words of advice to strawberry fans: âDonât wait.â

Strawberry Season!
âStrawberries are one of our big spring crops; they last about four weeks,â Ebert explains. âIâm always interested to see that so many people with children wait until schoolâs over to come pick strawberries as a family. But by late June the seasonâs almost over, and I wish I could have told them to come here earlier to get the berries at their best.â Spreading the word about how best to enjoy the produce grown and sold at Springdale Farms is mission No. 1 for its dedicated staff.

Springdale Farms has been a local institution since Ebertâs parents founded the business in 1949âat a time when Cherry Hill was awash with farms and SpringÂ­dale Road, now a bustling artery across the developed suburb, was a one-lane dirt track. Ebert represents the second generation of his family to own and operate the farm, a task he shares with his sister and brother-in-law, MaryAnn and Tom Jarvis. âWeâre the only working farm in Cherry Hill. We grow 35 different varieties of crops on 100 acres right here,â he says.

Six Varieties of Jersey Tomatoes
After strawberry season, the next big push will be tomatoes: Six varieties of Jersey tomatoes are grown at Springdale Farms, and Ebert points out that Farmer Tom even oversees a third annual plantingârare among commercial growersâto ensure that the delectable summer staple remains available well into fall. Around July 4, corn season will be in full swing. We purposely plant a late crop, so the same delicious corn lasts way, way into October,â he adds.

Primarily a vegetable farmâstrawberries, blackberries and raspberries are the only fruits cultivated hereâSpringdale seasonally plants broccoli, cauliflower, eight varieties of eggplant, okra, green beans, lima beans, all kinds of peppers, six varieties of lettuce, cucumbers, cabbage, beets, scallions, spinach and pumpkins, along with the aforementioned tomatoes and corn. Intent on bringing as much fresh produce to its on-site market as possible, Ebert advocates double and triple cropping on Springdaleâs 100 acresâessentially, planting a summer crop on the same patch of land where a spring crop has just been grown and harvestedâa sight the public can see on one of the farmâs educational hayrides. âWeâll take people or school groups out to, say, a field of tomatoes, show them how we start and grow and harvest the crop,â he says.

Pies Baked Daily
The garden center, home to a host of practical and unique gift items, is only one of Springdaleâs many indoor spaces. At the market, thereâs all that great produce, plus unexpected finds like local New Jersey wines. A trip to Springdaleâs not done, though, until you follow your nose to the bakery, where apple cider donuts and some 60 different pies are baked up daily on-premises.

âWeâve got so much going on, weâre always surprised when people stop in and say, âI had no idea what happens here. I thought it was just a garden center,ââ Ebert says. Among the farmâs other activities are birthday hayrides and special evening events in the farmâs glass-enclosed Conservatory. An ongoing partnership with the Garden State Discovery Museum has led to events like an evening of stargazing with astronomers from the Franklin in Philadelphia, as well as an annual joint fall festival and corn maze. Springdale Farms also keeps close ties with local scouting groups and schools, opening its facilities to troops on a regular basis.

Springdale Farms also participates in other community programs, ranging from the annual South Jersey Farm to Fork restaurant week, to the South Jersey Food Bank, to the American Cancer Societyâs Daffodil Days. The farm also maintains a presence each weekend, from May through November, at the award-winning Collingswood Farmersâ Marketâbringing produce and good food to older customers who prefer to shop in town. The best ways to keep abreast of the latest farm news, Ebert advises, is to sign up at the Springdale Farms website for the bimonthly newsletter or follow the farm on its dedicated Twitter account. âOur neighbors are our clients and friends,â Ebert says. âBy reaching out to them, weâre blending the best of both worldsâsuburb and farm.â