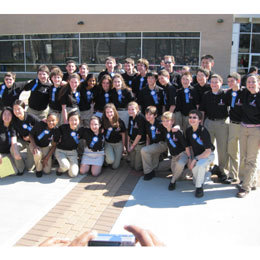 
by Editorial Staff--Suburban Family Magazine
Cherry Hill National History Day Team
A total of 31 students from Rosa International Middle School, Cherry Hill High School East and Cherry Hill High School West (pictured) participated in National History Day, a contest sponsored by The History Channel and the New Jersey Historical Commission. All members of the team advanced from the regional level and qualified for a statewide competition; itâs only the second time in the history of the competition that an entire team has advanced.

Moorestown Boysâ Baseball Team Giants
Moorestown Youth Baseball Federationâs Giants team started the season off with a 4-0 record, beating the Dodgers, Marlins, Cubs and Reds and leading the league in the most wins so far this season. The AAA National League consists of third- and fourth-grade students.

Voorhees Magic All-Star Cheerleaders
The Magic Cheerleaders, consisting of girls ages 3 to 18, compete in various cheerleading competitions and are active in community service. The organization helped to cheer on cancer survivors at the Breast Cancer Walk at Cooper River Park; donated five large bins of supplies to the Voorhees Animal Shelter and at the end of May will donate their hair to Children With Hair Loss, a company that makes wigs for children with cancer and other illnesses.

Cherry Hill Boysâ Baseball Team Giants
Cherry Hill Youth Athletic Associationâs team Giants is leading the AAA league with five wins, one tie and a loss. The baseball league, the youngest competitive division in the association, consists of 8- to 10-year-olds.