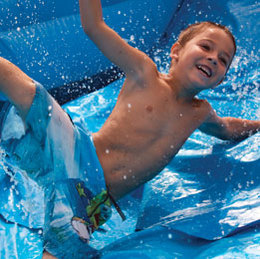 
by Andy Pritikin, Director, Liberty Lake Day Camp
How many of you reading this were literally forced out of your house as children to play for two or three hours at a time to do whatever? My guess would be most of you. My mother used to actually add the charming phrase, âI donât care if you throw rocks at each other!â to make her point: My brothers and I were going outside, and there would be no discussion about it.

Today, how many of you grown-ups force your kiddies outside for two to three hours at a time with no specific play date or plans? My guess would be very, very few. Why is this? Play is something that we as mammals were meant to do: itâs totally natural. Just watch a bunch of children left on their ownâor puppy dogs for that matter. We were meant to playâoutside, by the way.

This past winter we had almost 60 inches of snowfall in the Philadelphia area, yet in my cute little cul-de-sac with school-aged children in most every house I did not see one snowÂ­man. So there I was, shoveling my driveway outside, while all the children in our neighborhood were inside watching TV, playing video games, on the Internet, or texting. Including my kids, by the way.

In the book The Power of Play: How Spontaneous, Imaginative Activities Lead to Happier, Healthier Children, author David Elkin outlines how childhood traditions are going the way of the dinosaur. Hop scotch, hide and seek, and games we played as kids are being forgotten. At Liberty Lake Day Camp, some of the most popular activities include playground games like wall ball, ga-ga (a form of dodgeball) and four-squareâbecause kids have never, ever played them before!

A third of schools in the United States have less than 20 minutes per day of recess. In my childrenâs school, physical education is on a two-week rotation with computers, Spanish, art and health. And forget about after school: with hours of homework, sports practice, music lessons, karate, dance, when is there even time to play?

We have created a society that limits play for our children. Reasons for this include: the loss of social capital that modern children have, the loss of true âneighborhoods,â in which neighbors actually know each otherâs names, the loss of time (see above), the need to be a great parent (including over-scheduling your kids), and ambition/homework (see Wendy Mogulâs Blessings of a B-Minus). Too many parents have irrational fears that their kids will get snatched outside. According to Lenore Skenzay, author of Free-Range Kids, statistics show that the world is actually a whole lot safer than it was back when we were kids. Another threat to free play is organized sports. Just because children play sports, doesnât mean they know how to play (or eventually work) with one another, and it contributes to the average child spending 101 minutes being driven around from place to place each day!

The Kaiser Family Foundation study on screen time shows that children ages 8 to 18 spend an average of seven hours, 38 minutes, devoted to screen time each day. This translates to more than 53 hours per week! Todayâs children have the lowest rates of play ever, coupled with the highest rates of depressionâcoincidence? And donât forget increased obesity, stress, anxiety, ADHD, social incompetence and a loss of contact with nature.

In many ways, summer camp has become the antidote to modern society. Campers come to places like Liberty Lake so that parents know they are safe, and so kids can flourish learning the real-life skills that schools donât teach, like: creativity, collaboration, responsibility, leadership, critical thinking, communication, adaptability, flexibility, and what it means to be a good friend. Places like Liberty Lake create an âextraordinary worldâ that inÂ­spires children to believe that anything is possible, and that their potential is limitless.

Summer Camp is a step back in timeâno cell phones or video gamesâwhere âsocial networkingâ involves actually speakÂ­ing to people face to face, and being someoneâs âfriendâ is much more than an online acquainÂ­tance. Camp is the real dealâand without their parents around, children learn the kind of social independence that many kids wonât get until they go away to college. Most of all though, children learn to play, just like the old days. They get to enjoy their childhood doing things that children have done for thousands of years: playing with one another. We need to give our children lots of sunshine while they are youngâbecause as we know, they are going to need it later!