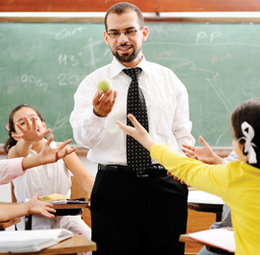 
by Danielle Burrows
As the repercussions of budget cuts trickle down through South Jersey school districts, the question isnât whether your child will be affectedâitâs how.

Sharon Stokes points out that custos, the root of âcustodian,â means guard.

A fitting translation, considering the Haddonfield Memorial High School Latin teacherâs concern that the districtâs decision to privatize custodial services affects building safety and camaraderie more than cleanliness. âThe outside company does a perfectly fine job, but our staff custodians knew our students,â Stokes says. âThey were here at night when the kids stayed late for games. They could make sure someone who forgot a textbook got safely in and out of the building with no problem. They knew who belonged on-site, and who didnât.â

Itâs a minor concern, some might say, given the seismic shifts of the academic and extracurricular variety that have stemmed from Gov. Chris Christieâs $820 million statewide educational budget cuts a year ago. But itâs one of many ripple effects, large and small, that are altering the quality of public education in South Jersey. South Jersey districts are battling staffing cuts, adding activity fees and contemplating school closures. The issue is even being heard by the state Superior Court, which will decide whether cuts are preventing schools from meetÂ­ing curriculum standards. Although Gov. Christieâs fiscal 2012 budget restored $250 million of that state aid, the damage may be done. The question now is: Will budget cuts also put a strain on your childâs future?

Last yearâs state aid cuts amounted to around 5 percent of many districtsâ total yearly budgets. Hardest hit are those districts on the receiving end of the most drastic cutsânamely, Moorestown, Cherry Hill, Haddonfield and Washington TownÂ­ship, which collectively lost more than $20 million in state aid between 2009-2010 and 2010-2011. In Evesham, plans are afoot to close the Florence V. Evans Elementary school and, potentially, slash 82 jobs. All this is on top of about 5,400 teacher jobs cut statewide last year, according to statistics from the New Jersey Education Association, (NJEA), the stateâs 200,000-member teachersâ union.

âBefore the cuts were announced [last year], superintendents in the region suspected there might be 5 [percent] to 8 percent cuts in state aid, but no one expected it to cut as deeply as it did,â says Richard Perry, superintendent of Haddonfield Public Schools. Haddonfield was one of only six districts in the state to receive no state aid for the 2010-2011 school year.

âSometimes it seems the state focus is on needy districts, whereas premier districts are left to fend for themselves to maintain high levels of education,â Perry adds. âAdd the statewide 2 percent tax levy cap into the equation, and itâs especially concerning. Weâre forced to find ways to generate revenue ourselves.â (The cap, which went into effect Jan. 1, limits local governments to half of the formerly permissible annual tax increase.)

For Haddonfield, consistently rankÂ­ed among the stateâs top districts, one of these prospective revenue streams is its tuition program, which allows non-residents to pay upwards of $9,000 annually to attend its schools.

âWe hosted an open house that was attended by well over 60 people, and have received numerous applications from non-resident students,â Perry says. Most districts, though, donât possess the cachet to draw a steady stream of outside tuition. For these districts, outside-the-box thinking and belt-tightening are requiredâbut not without repercussions, some more obvious than others.

âIâm not sure community members always are aware of the ripple effects taking place around them, because things generally look the same,â Stokes says. âFor example, in Haddonfield, we lost a secretary, so weâre down to one at the middle school and one at the elementary school; they share an office. If one of those secretaries is out, the other canât take a lunch break and is working to full capacity. It changes the landscape of the school.â

Other changes, like growing class sizes, are more apparent. When Kevin Parker began teaching high school English in Washington Township nine years ago, his classes were generally about 20 students strongâa refreshing change from the class of 34 students heâd overseen while student teaching at Philadelphiaâs Central High School. Fast-forward to 2011, and his honors classes consist of as many as 27 students.

âI want to give more individual attention to each student, but thereâs only so much time in one day,â Parker admits. âItâs frustrating. I can handle it now, but I worry about it getting worse. I donât think the full impact of the cuts have been felt yet.â

But larger class sizes in Washington Township, prompted by more than 70 retirements since July of 2009 and the elimination of close to 45 teacher positions, are just the tip of the iceberg. Among the laundry list of cuts in the district are the loss of four guidance counselors, nine food services workers, five secretaries and two hall monitors. The talented and gifted curriculum has been absorbed in grades one and two by computer teachers, and is shared in grades three, four and five by three teachers who split their time between schools. Instrumental instruction now begins in fourth grade instead of third grade.

âWe do anticipate the need for additional cuts in 2011-2012, and will have some very difficult decisions to make,â Washington Township Public Schoolsâ community relations coordinator Jan Giel says.

Resident Paul Headleyâs son Evan, a fifth-grade student, was so under-stimulated by Washington Townshipâs talented and gifted program that he recently opted out of it, choosing instead to test into, and participate in, a program for gifted students offered by the Johns Hopkins Center for Talented Youth.

âWeâre hoping that as he gets older, the public school will offer something more stimulating for him,â Headley says. âItâs frustrating; we chose to live in Washington Township for its schools, and we pay hefty taxes. If Evan was on the other end of the spectrum, needing help, the district would offer him all the help in the world. I understand investing in kids who need to be brought up to speed, but those efforts need to be matched for kids on top, as well. You look at scenarios like these and see why our nation is losing its academic advantage.â

Lili Levinowitz, professor of music education at Rowan University and co-founder of Music Together, an early childhood music and movement program, notes that budget cuts tend to spell losses for music programs. Students, she says, may be losing out on more than just a spot in the wind ensemble.

âLearning an instrument is about far more than just performance. Music education has impacts on other forms of learning and brain development,â she says. âMarginÂ­alizing it comes as a cost to the developing mind. Itâs important for students to receive music instruction as early as possible.â

As well, the toll on teacher moraleâand the risk of losing experienced teachers to surrounding statesâis significant. If budget cuts and other changes drive the best teachers out of South Jersey, itâs students who will pay the price.

âBetween the cuts to extracurricular activities, the attacks on teachersâ tenure, and the possibility that weâd have to live in-state to teach [in New Jersey], Iâve considered heading back over to the bridge to Pennsylvania [to teach],â says Parker, a Philadelphia resident. A recently passed residency bill requires new public sector hires to reside in-state. âNobodyâs in teaching for the money. I really just want to do my job, but I feel like Iâm being antagonized.â

Tax-paying residents might feel similarly as they face increased pressure to contribute time and money to fundÂ­raising events as a time when their own dollars are stretched.

âParents in general seem affected by their own tighter finances,â observes Ellen Stofman, president of the Cherry Hill Education Foundation (CHEF), a fundÂ­raising nonprofit that was relatively dormant until it was revived in 2007 to supplement the schoolâs own budget. In the four years since, the program has raised money and distributed grants totaling more than $270,000 to district teachers. âThe timing was perfectâ for the renewal of the program, Stofman says. âAs soon as we got started, the budget situation changed so drastically. Itâs always important to raise funds for programs not typically funded by the school budget, but now itâs even more urgent due to the cuts.â

But with community-based giving unable to fully supplement the losses in state aid, CHEF is turning to the idea of bringing corporate money to Cherry Hillâs schools. An offshoot of CHEF is a naming rights committee that is exÂ­ploring raising revenue by selling corporate sponsorships for district-owned assets. If the initiative comes to fruition, companies could lend their names to everything from auditoriums to entire schools. Itâs an unorthodox approach to fundraising, sure, but not an entirely unprecedented one: TD Bank already contributes $20,000 annually to help CHEF send every township sixth-grader on a weeklong environmental studÂ­ies trip in the Pine Barrens.

âOur district is always trying to stay competitive,â Stofman says, âAnd we need to do whatâs necessary to keep our educational standards high.â

From allowing corporate infiltration into schools to charging activities fees for extracurricular activitiesâas is the case in Cherry Hill, Washington TownÂ­ship and HaddonfieldâHiltner worries that the rift between âhavesâ and âhave notâ is widenÂ­ing, and that the future of New Jerseyâs public schools is being jeopardized.

âWe know that children are successful when they get well-rounded educations, so cuts to arts and extracurriculars cut to the very core of our studentsâ potential,â she says. âNew Jersey has long been a standard-bearer of public education in our nation. Why would our government do something that disrupts that level of success?â