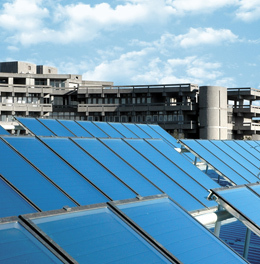 
by Bill Donahue
So far itâs been a winter to remember, mainly for its sustained harshness. Yet, despite the potential for ice storms, blizzards and other perils of winter, South Jersey remains one of the most ideal locations in the countryâand perhaps the worldâfor farming and reaping the benefits of solar power, according to Joe McKeever, executive vice president of Aztec Solar Power LLC, a leading solar integrator based in Wayne, Pa.

âIn this general region we calculate solar on how many hours of day it would get peak performance, and weâre getting about four and a half hours of peak performance a day [on a year-round basis],â says McKeever. âItâs equivalent or actually better than what happens in GermanyâGermany is probably four [hours a day] or a little lessâand Germany is leading the world in solar installations, maybe second best to Italy or some of the other European nations.â

In the United States, South Jerseyâs four and a half hours of peak solar performance may not be as good as the more sun-bleached statesâsay, California and Floridaâbut this regionâs seasonality actually works in its favor.

âYou have all the four seasons in this area, and with that comes the winter that weâre up against right now,â says McKeever. âThe funny thing is people say, âWell, you need heat; youâve got to heat the panels up.â Everybody associates solar power with heat, but the panels donât heat up; itâs the visual rays of the sun that actually stimulate the cells inside the panel. The cooler the temperatures, the better the equipment runsâsimilar to what you see in electronics. â¦ Intense heat will actually degradate the system and make it not work as well.â

Although South Jersey might receive less sunlight in winter than some other states, it still gets enough sun to generate ample hours of peak performance all year long.

âThatâs the tradeoff,â says McKeever. âIn the summer here, you have more sunlight but less power due to the heat. â¦ On the coldest, darkest day of December, youâre probably still going to get about four hours of peak performance, whereas in the middle of June or July youâre probably going to get upwards of six to eight hours of peak performance.â

New Jersey is a prime solar candidate for reasons beyond weather: its vastness of beautiful farmlands, rolling hillsidesâessentially a plentitude of open space. This creates an opportunity for farmers and landowners, who could benefit by leasing a certain amount of land on which to install solar arrays, either to produce power for their own consumption or find an âoff-takerâ who can handle however much power the system yields, according to McKeever.

Weather Proof
Although the regionâs colder temperatures can actually help the solar panels work more effectively, the accumulation of ice and snow can prevent the panels from working properly. When thereâs an ice storm, for example, and traditional power lines are disconnected from the grid, the system wonât work because of the inverters needed to convert the power for energy consumption. In such an event, the system will automatically switch to traditional electricity generated by the grid. There are other issues involved with the intervention of poor weather, but Aztec Solar has plans in place to make sure customersâ solar arrays remain operational.

âEven if a few panels are blocked, the system wonât work,â McKeever says, âso we have maintenance contracts [for workers] to come out and remove snow and help make sure the systems are up and running during inclement weather.â

The company also has an advanced monitoring system, which observes the activity of all its systemsâresidential, commercial/industrial, government, etc. For residential installations, the same system also gives the homeowner the ability to monitor the amount of power the system is producing. The system can also sense which solar arrays may be 100-percent operational, according to McKeever: âOur IT guy, who monitors the system, probably knows more about the power outages right now than what you hear on KYW, based on what heâs seeing in there.â

âIf after a day or two, when the sun is out and shining bright and weâre still seeing the same negative readings, weâll be proactive,â McKeever says. âWhat we do is call our customers up and say, âMrs. Jones, weâd like to come out and check to make sure the system is up and running.â Weâre basically calling the customer before the customer even knows that somethingâs down, unless they themselves are viewing their own system. The only other time they will see it is in their next electric bill; theyâll see a spike because the system has been shut down â¦ because they were pulling from the grid.â

Whatever minor disruptions may occur, the benefits of solar power will continue to grow as the costs of utility-provided electricity continue to climb. The sun is going to come up every day, after all, thereby producing power to help people saveâand, in some cases, makeâmoney.

âEven if today was a cloudy day but thereâs no rain and ice and snow that weâve been seeing, that system is still producing something,â McKeever says. âThe reality is that the system is always producing power, regardless of time of year. The other benefits: Theyâre doing something good for the environment; itâs lowering their energy costs and putting money back in their pockets; and itâs something thatâs going to have [a return on investment within] five to seven years in todayâs market on a system thatâs guaranteed for 25 years through warranties.

âItâs going to pay for itself three or four times over.â