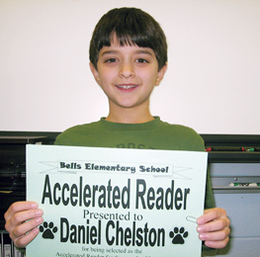 Evan Kilgore
Mount Laurel
Evan Kilgore, a senior at Lenape High School, has been a member of the marching band since 2007. He performed on the alto saxophone for the 2010 All State Jazz Band and has been inducted into the 2011 All-South Jersey Wind Ensemble and 2011 All-State Wind Ensemble.

Danny Gallagher
Mount Laurel
Second-grade Parkway Elementary School student Danny Gallagher was recognized as Parkway’s grand prize winner in the Mount Laurel Fire Department’s “Get Fired Up for Literacy” contest. This year, 146 students participated with a total of 80,645 minutes read. Gallagher read a total of 17 hours and 28 minutes within the two-week time period.

Jacklyn Pezzato
Medford
Jacklyn Pezzato, a sophomore, was honored as Shawnee High School student of the month. She is a sophomore captain for Blue and White night and a member of the Deborah Heart Challenge Academic Team, and she spends her time volunteering at the Voorhees Pediatric Rehabilitation Center.

Darius Black
Voorhees
Sixth-grade student Darius Black, a second-honors student at Voorhees Middle School and an accomplished dancer, performed the role of the Little Prince for the last two years in the Pennsylvania Ballet’s Nutcracker.