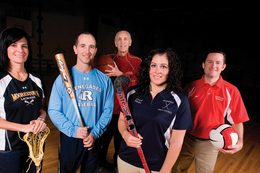 We all know that coaches are the glue that holds a team together. But how often do they get acknowledged? From high school sports to youth leagues, South Jersey is full of superstar athletes. Now is the chance for us to highlight the all-star coaches who guide these amazing athletes and teams to victory.

Kevin Meder
Lenape High School Girls’ Soccer
Kevin Meder of the Lenape girls soccer team has been coaching for the past six years. This past season, his team was the 2010 Olympic American Conference Champions, the 2010 SJSCA Coaches Tournament Champions, the 2010 South Jersey Sectional Champions and the 2010 New Jersey Group IV State Champions. Meder’s team was also ranked No. 1 in the state of New Jersey and No. 4 by ESPN Rise. Meder was also named the National Coach of the Year for Girls Soccer by ESPN.

Anthony Gallo
Cherokee Boys’ Soccer
Cherokee boys’ soccer coach Anthony Gallo has been coaching for the last eight seasons. This past season, the team was undefeated at home, advanced to the semi-finals of the Coaches Tournament for the second time in three years, defeated Shawnee High School on their home field for the first time in school history, won the Group IV South Jersey title for only the second time in school history and was ranked No. 3 in the state by the Soccer Coaches’ Association of New Jersey.

Danyle Heilig
Eastern Regional High School Field Hockey
For the 12th year in a row, Danyle Heilig has led her Eastern Field Hockey team to win the Group IV state championship. The team finished their 2010 season with a record of 26-1.

Renee Phelps
Shawnee High School Field Hockey
Renee Phelps has been the varsity field hockey coach since 2006. Her team is the 2010 Olympic-Patriot Conference Champions and the Group IV Central Sectional Champions. In 2007, she was named a Field Hockey Club Coach of the Year.

Jeff Holman
Haddonfield High School Girls’ Tennis
The Haddonfield High School girls’ tennis team, led by coach Holman, had a 31-1 record and won the state Group II title this past season. In the past two years, the team went 63-1, earning two state titles and one Tournament of Champions crown. Holman’s career record over 34 years as the girls’ coach is 934-121.

Tim Welsh
Medford Youth Athletic Association
Jim Welsh has been the assistant coach for Shawnee High School Varsity football and baseball for the past 20 years. He is also head coach of the Medford Renegades youth travel baseball team, with a record of 63-28-3 to date. He is also the 2011 Medford Renegades Travel Baseball Commissioner, the president and co-founder of the New Jersey Strength Coaches Organization and he was inducted into the NJSCA Hall of Fame in 2005.

Deanna Knobloch
Moorestown High School Lacrosse
Lacrosse coach Deanna Knobloch has been coaching at Moorestown High School since 1992, racking up more than 370 career wins. Her team won the New Jersey Tournament of Champions 10 years in a row, and she was inducted into the U.S. Lacrosse, New Jersey Chapter Hall of Fame. She is the vice president of the Lacrosse Club of South Jersey.

Mike Hudock
Washington Township High School Bowling
Coach Hudock has been coaching since 2006 and received the 2010 Sport Award from the New Jersey Interscholastic Athletic Association for his contribution to athletics. The girls’ bowling team finished their regular season with a 20-0 match record and won the 2011 Group IV title at the South Jersey Sectionals, their first ever. Last season the boys’ team won the 2010 Group IV State title and took home the Tournament of Champions title.

Daniel Williamson
Doane Academy Boys’ Basketball
Daniel Williamson has rebuilt the Doane Academy Basketball team (from a 70-student high school population) into a respectable high school program. The team, which had only earned one playoff slot prior to Williamson’s arrival, has since made it to the playoffs five years running. Williamson also started a DeVry College boys’ basketball team, which finished with an 8-10 record in its very first year. In addition, he is a motivational speaker and a mentor for troubled teen athletes.