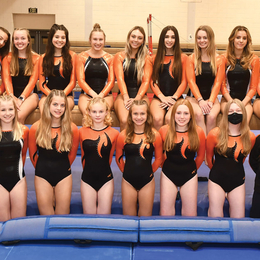 Cherokee Chiefs
Gymnasts to watch: Cherokee is happy to welcome back several notable standouts, including sophomore Addison Wright, who placed 11th in the all-around at the state championships as a freshman and earned all-state third-team honors. She also took fifth in the all-around at sectionals, first in the all-around at three dual meets and especially shined on the bars and floor exercise throughout the year. Junior Kaitlyn Cosper is another key returner who had a strong all-around effort at states, finished fourth in the vault at sectionals and won the all-around at two dual meets. Senior Meghan Wilson will also be counted on, while other returners looking to contribute are senior Alma Gashi, juniors Lindsey Bonkowski and Ava Dormer and sophomores Katie Armellino, Aubree Ellis, Keira Fronczak and Kara Mulholland.

Outlook: The Chiefs are coming off a successful season in which they compiled a 7-2 record and took second at sectionals. With Wright and Cosper leading the way, hopes are high for 2022.

Lenape Indians
Gymnasts to watch: Lenape suffered a big loss when junior Kaydence Bloomer moved, but on the bright side, junior Tula Pappas is a key returner who had a first, a second and a third in the all-around during dual meets. She is especially impressive on the bars and vault and will be a leader this season for a young squad. Sophomore Kaylee Carr showed promise as a rookie and is another top competitor. Several newcomers will be relied upon as well.

Outlook: The Indians are in rebuilding mode but hope to take steps forward as a program.

Seneca Golden Eagles
Gymnasts to watch: Seneca graduated several standout gymnasts but is excited about the remaining talent in the program. Junior Morgan White has been a top competitor at dual meets the past two years and placed third in the all-around twice as a sophomore. She hopes to take the next step as an upperclassman. Sophomores Serena Coppola and Maya Warner both showed a lot of potential as rookies and are key returners, and senior Emma Kambeck is a veteran leader. Freshman Nayah Hahn is a strong addition and is expected to make an impact right away.

Outlook: The Golden Eagles have been a tough opponent in recent seasons and hope to contend for a winning record this fall under new head coach Heather Gardner.

Shawnee Renegades
Gymnasts to watch: Shawnee brings back a deep and talented roster led by senior Diana DeMarco. She was a consistent competitor in dual meets last year, placing second in the all-around on three different occasions and placing first in the floor exercise twice. Seniors Carlie Richards and Tessa Harty and juniors Kylee Dwornik and Cecilia Sherman are other key veterans. Sophomore Alayna Cottone shined as a rookie with two third-place finishes in the all-around and a first in the beam, while Ellie Majewski also had a strong freshman season with a second-place finish on the bars and three third-place efforts in different events. Elizabeth Majewski, Kayleigh Neubauer, Morgan Harber and Caitlin Baublitz are other members of a terrific sophomore class.

Outlook: The Renegades were competitive in every meet last year and finished with a 7-4 record for their second consecutive winning season. With a lot of experience back in the fold, they enter 2022 with high hopes as new head coach Amanda Kurtz moves over from sister school Seneca to lead the program.

Washington Township Minutemaids
Gymnasts to watch: Washington Township is paced by a pair of stellar seniors who happen to be close friends on and off the mat: Angelina Stanfa and Isabella Nelli. Both placed in the top four in the all-around at sectionals, with Stanfa taking second and Nelli fourth. Stanfa, who added a second on the beam and a third on the bars at sectionals, was also a force during dual meets and was named to the all-state second team. Nelli was second in the floor exercise at sectionals, tied for fourth on the beam and tied for fifth on the vault, and also won the all-around in two dual meets. She made the all-state third team. Veronica DeLuca, Ryleigh Petersen and Ravenna Sargent are other seniors expected to make an impact. Sophomore Mackenzie Gramble had a solid rookie season in which she posted two firsts on the vault, two seconds on the bars and a third on the beam, and Hannah Grace Lindstedt is another sophomore to keep an eye on.

Outlook: The 2021 season was a magical one for the Minutemaids, who went 8-0 and captured their first sectional championship since 2015. With Stanfa and Nelli leading the way, they will continue to set lofty goals.