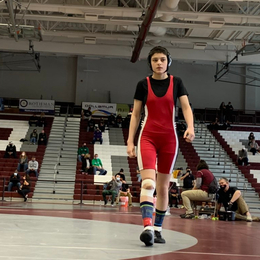 Winter Athletes to Watch
The student-athletes who are heating up the competition.

Derek Simpson, Lenape boys basketball
Entering his fourth year as Lenape’s starting point guard, this 6-foot-3 senior has been an impact player from the minute he stepped on the court for the Indians. He averaged 20.6 points and 4.9 assists last season to make the all-state third team and eclipsed the 1,000-point milestone for his career, leading Lenape to a 10-4 record. Simpson will continue his career at Rutgers, where he will take his superb outside shot and high basketball IQ to a program on the rise in the Big Ten.

Andrew Ball, Shawnee boys basketball
At 6-foot-8, Ball has the size of a big man to go with the shooting and dribbling skills of a guard, and that combination has enabled him to emerge as one of the best all-around players in South Jersey. He averaged 12.8 points per game two years ago as a sophomore, and last year he was in double digits again in just seven games, as Shawnee faced multiple COVID shutdowns. Ball is looking forward to a full senior season before moving on to the Division I level at Monmouth.

Hannah Hidalgo, Paul VI girls basketball
With everything she has accomplished already in her high school career, it’s hard to believe that Hidalgo still has two seasons left in a blue and white Paul VI uniform. The junior point guard followed up a fantastic freshman year with an even better sophomore campaign, as she led the Olympic Conference in scoring at 20.2 points per contest but also affected games in so many other ways, adding 5.1 rebounds, 3.9 steals and 3.5 assists. She helped the Eagles to a 13-2 record and an undefeated mark against South Jersey competition.

Kassidy Thompson, Camden Catholic girls basketball
After a promising freshman season at Clearview, Thompson transferred to Camden Catholic last year and led the Fighting Irish with 18.6 points and 6.4 rebounds per game as they went 7-2 in a shortened season. A contributor at both ends of the court, she is poised for a huge junior campaign and is a major reason why expectations are high at Camden Catholic.

Dakota Morris, Kingsway wrestling
With two district titles, a pair of region crowns and two trips to the state podium during his stellar career, there is one major goal left for Morris to accomplish. The senior will be aiming for his first state championship this season after finishing second at 160 pounds last year. That was his only loss during a 15-1 campaign and he has an 81-16 record overall as a Dragon. Morris is one reason why Kingsway should remain one of the top teams in New Jersey.

Jared Brunner, Eastern wrestling
Brunner has been a state placewinner each of the past two seasons and hopes to be in contention for a state title in his final campaign. He went 13-4 as a junior, took second at regions and sixth at states in the 113-pound weight class. A Brown University commit, he brings an 87-21 career record into his senior season.

Maya Hemo, Cherry Hill East wrestling
After a thumb injury forced an early end to her promising freshman season and caused her to miss the postseason, Hemo made up for lost time last year by placing third at regions and moving on to the state tournament, where she finished fifth thanks to a pin in her final match. The experience should pay off in her junior season, which she enters with high hopes.

Maddie Waggoner, Moorestown swimming
Waggoner, a junior, is coming off a sophomore season in which she made the all-state first team and should be in the mix for several individual titles this year, including a state championship. She shines in multiple events, including the 200 and 500 freestyle along with the 100 butterfly. A member of the Jersey Wahoos outside of high school, she was recently one of 26 athletes named to the USA Swimming National Junior Team.