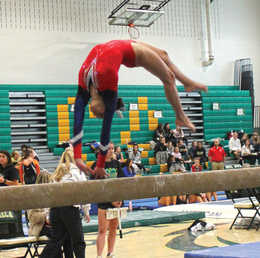 Cherokee Chiefs
Gymnasts to watch: Cherokee brings back a deep and talented roster led by junior Hannah Aldewan, sophomore Kaitlyn Cosper and senior Jill Strauss. Aldewan, who took fifth in the all-around at the Olympic Conference Championships as a freshman, was unable to follow up that performance since championship meets were not held last season due to the pandemic. She did continue to shine at duals, however, placing in the top three in the all-around five times, including one win. She was particularly impressive in the bars, taking first four times in that event. Cosper burst onto the scene with a remarkable rookie campaign, finishing in the top three in the all-around four times, with two firsts. She had 10 other first-place efforts in various events. Strauss was another standout who placed first in the all-around on three different occasions. Senior Bridget Willson was also a big contributor in duals, especially on the balance beam. Other top gymnasts are junior Meghan Willson and seniors Alyssa Goldsmith and Levi McLaughlin.
Outlook: The Chiefs are coming off a memorable 6-2 season, their most wins in a year since 2016. The good times should continue this fall as they expect to contend for a conference championship.

Lenape Indians
Gymnasts to watch: Kaydence Bloomer put together a fantastic freshman season and will look to build on it this fall. She placed in the top three in the all-around at five different dual meets, with strong showings in the vault and beam. It will be interesting to see what she can do when the conference and sectional meets return. Tula Pappas is another sophomore standout who took first in the all-around in one meet and was solid on the bars throughout her rookie campaign. Hannah Seitz is a junior leader for the Indians and sophomore Norena Garcia also returns to the lineup. Several new gymnasts have joined the team and hope to make their presence felt as well.
Outlook: The Indians have been in rebuilding mode for the last few years but are on the right track with some talented youngsters in the program.

Seneca Golden Eagles
Gymnasts to watch: Senior Rylee Langdon is looking to put an exclamation point on her memorable career at Seneca. She was a state qualifier two years ago as a sophomore—and surely would have been in the mix last season if the state championships were held—and has a good chance of returning in 2021. Langdon took first in the all-around in four different dual meets last season and recorded first-place finishes in 12 other events throughout the season. Delaney Insinga and Kelsey Langdon are other senior stars who have the potential to make waves at the conference and sectional meets along with duals. They were both top competitors in dual meets last year, particularly standing out in the vault and balance beam. Sophomore Morgan White flashed potential as a rookie by placing third in five different events. Serena Coppola, a level 4 gymnast, and Maya Warner are two freshmen to keep an eye on.
Outlook: The Golden Eagles were competitive in most of their meets last year and finished with a 3-5 record. With a talented senior class paving the way, hopes are high heading into the fall.

Shawnee Renegades
Gymnasts to watch: Shawnee graduated a terrific gymnast in Felicia Poblete but is happy to welcome back junior Diana DeMarco, who had a sensational sophomore campaign. She was first in the all-around in two dual meets and took second in four others. With conference, sectional and state championships returning this fall, DeMarco could make waves in those competitions. Another key returner is junior Carlie Richards, who bounced back from an injury her freshman year and was a big contributor during dual meets as a sophomore, placing second in the all-around twice and third twice as well. Cecilia Sherman is a consistent scorer and Kylee Dwornik brings energy to the squad. Both sophomores showed promise as rookies and will look to take on bigger roles. Shawnee also has three freshmen and a junior who came over from the cheerleading team who are eager to have an impact.
Outlook: The Renegades won three of their last four meets last season to finish with a 5-3 record, their first winning campaign since 2017. The team has gradually gotten better in the last few seasons under head coach Mike Maira—who is quick to share credit with his assistant, Bill Burtis, a coach in the district for more than 40 years—and another strong season appears likely with DeMarco and Richards back in the fold.

Washington Township Minutemaids
Gymnasts to watch: Washington Township brings back a deep and talented roster that can potentially be one of the best in South Jersey. Leading the way is junior Isabella Nelli, the all-around champion at the Olympic Conference Championships two years ago. As a sophomore, she won the all-around at two dual meets and added firsts in seven other events. Angelina Stanfel is another terrific junior who shines in every event. The senior class is outstanding as well: Ava Ricevuto, Olivia Crabtree and Gabby Vetere all made major contributions in numerous events and are capable of sparking the Minutemaids on any given day. All five of those veteran gymnasts will be worth watching at the championship meets as well. Abby Barca and Bella DeLuca are other senior leaders, and other returners hoping to make an impact are seniors Giavanna D’Antonio and Angelina Rossi and juniors Nikki DeLuca, Ryleigh Petersen and Ravenna Sargent. Two incoming freshmen will add to the team’s depth.
Outlook: The Minutemaids got off to a 1-2 start last season but won their final five meets to finish with a 6-2 record. They will be a tough team to beat this fall thanks to their impressive core.