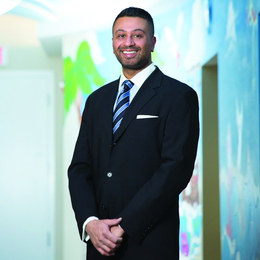 Dr. Frank Batastini
Frank Batastini Orthodontics
Moorestown, Turnersville
BracesBraces.com
After attending college, Batastini originally pursued a career in banking but he could not escape following in his family’s orthodontic footsteps. Coming from a family of orthodontists, he would visit and work often in his dad’s office, remarking what a great job it would be. That led him to obtaining his dental degree from Temple University and later his orthodontic certificate from the University of Pennsylvania. “After spending several years in my father’s practice there was no doubt that orthodontics was the right career for me and I’ve enjoyed every minute of it over the last 25 years,” he says. Batastini is a member of several professional societies and is a past president of the New Jersey Southern Dental Society. He has accomplished the Invisalign Master Program and lectures at area colleges. Together with his staff, Batastini has supported the Make-A-Wish pasta and crabs dinner for more than 10 years.

Dr. Tom Kadar
Kadar Orthodontics
Sewell
GoKadar.com
Kadar received his doctor of dental surgery from Georgetown University and has been creating smiles in South Jersey for more than 25 years. His practice is rooted in providing top-notch care and results by combining the latest technology with a friendly, welcoming atmosphere. He was one of the first in South Jersey to offer digital scanners for impressions, Invisalign clear aligners and 3D printers to create custom aligners in-house. Kadar Orthodontics’ new Same Day Start Program is helping its patients achieve a smile even faster. Each year, Dr. Kadar receives recognition from his patients as being one of the top orthodontists in the Delaware Valley. “We have never forgotten the importance of our patients,” says. Kadar. “They are why we have flourished in South Jersey and been able to grow for our community.” He firmly believes in giving back to the community and is a regular supporter of Alex’s Lemonade Stand, Mothers Matter and Smiles Change Lives, among others.

Dr. Sonny Sekhon
Growing Smiles
Mount Laurel, Voorhees
MyGrowingSmile.com
Sekhon is a graduate of Howard University and completed an oral surgery fellowship at King’s County Hospital, followed by residencies at Maimonides Medical Center in Brooklyn. While in residency, Sekhon realized his true calling was treating children. His background in cosmetic dentistry and natural connection with kids proved to create better outcomes and earned him the recognition as the top resident in his program. He became the director of pediatrics for a large group of dental practices before coming to South Jersey and opening Growing Smiles where he is known for creating a relaxing atmosphere and using minimal anesthesia. “We treat the patient, not the problem. We believe in conservative, compassionate dentistry. Our approach is always to do what’s best for our patient. Satisfaction arises from eliminating the problem, and transforming a smile,’ he says. Sekhon participates in the annual National Give Kids a Smile Day and donates to local and international causes.