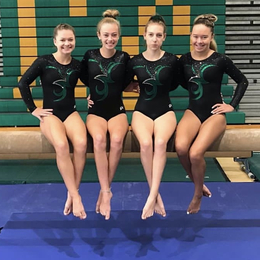 LENAPE INDIANS
GYMNASTS TO WATCH: Lenape graduated its top gymnast, Katelei Clark, and several other strong competitors, so new leaders will have to emerge. Seniors Michelle Curtis and Paulina Friedman will look to fill the role, as both were consistent during dual meets last year and also had solid performances at the Olympic Conference Championships. They will help set the tone both on and off the mat. Junior Jillian Schwarz is another  returner hoping to contribute, and several newcomers will be counted on as well.
OUTLOOK: Last year was a rebuilding one for the Indians, and they hope to keep making progress this fall with Curtis and Friedman leading the charge. Longtime head coach Scott McManus has retired, and a new coach had not been announced as of press time.

SENECA GOLDEN EAGLES
GYMNASTS TO WATCH: Seneca may not have the numbers of other programs in the area, but its core is hard to top. It all starts with junior Rylee Langdon, who placed third in the all-around at the Olympic Conference Championships. She was the conference champion in the bars and also took fourth in the event at sectionals to qualify for states. Langdon also finished third in the  vault and fourth in the beam at the conference meet. Junior Delaney Insinga is another standout who took sixth in the all-around at the conference meet, with a high finish of third in the floor exercise. Kelsey Langdon is a third talented junior who placed 11th in the all-around in the conference. Senior Emily Cutts rounds out the veteran nucleus, and freshman Morgan White is a skilled gymnast who should have an immediate impact.
OUTLOOK: The Golden Eagles went 7-2 last year and shared the Olympic Conference regular-sea- son title with Washington Township before taking second to the Minutemaids at the conference meet. They also placed fourth at sectionals to cap a terrific season. With all four gymnasts back in the fold, they will aim high again in 2020.

SHAWNEE RENEGADES
GYMNASTS TO WATCH: Senior Felicia Poblete has had a career to remember at Shawnee and it will be exciting to see how it wraps up this fall. Last year she was the all-around champion at sectionals, as she placed in the top three in each event, including a second straight title in the vault. She went on to compete at states and was an all-state third-team all-star. Poblete also took second in the all-around at the Olympic Conference Championships and was the conference champion in the floor exercise. Sophomore Diana DeMarco is coming off a promising rookie season in which she placed 10th in the all-around at the conference meet. Junior Brooke Tenet and senior Alexandria Ramare other strong competitors, and other returners hoping to contribute are senior Anna Elder and juniors Brynn Hurley and Kayla Kaczar.
OUTLOOK: After compiling a 3-5 record in 2019, the Renegades are shooting for a winning season this fall. Poblete is looking to defend her sectional championship and claim her third conference title as well.

WASHINGTON TOWNSHIP MINUTEMAIDS
GYMNASTS TO WATCH: Isabella Nelli burst onto the  scene last year with a remark- able rookie season and it will be exciting to see what she can do for an encore. She was the all-around champion at the Olympic Conference Championships, as she placed first or second in every event. She went on to take fourth in the all-around at sectionals—with a top finish of second in the bars— and qualified for states. Nelli also shined during dual meets, but she is far from the only standout for Washington Township. Sophomore Angelina Stanfa also turned heads as a freshman, placing fourth in the all-around in the conference. She took second in the floor exercise and fifth in the beam at sectionals to qualify for states. Junior Olivia Crabtree is another proven competitor who took seventh in the all-around  at the conference meet, while seniors Avarie Berndlmaier and Nicola Iatarola and juniors Gabby Vetere and Ava Ricevuto also had strong showings. Senior Gabby DeLuca and juniors Abby Barca and Angelina Rossi are other key veterans.
OUTLOOK: Last year was another banner one for the Minutemaids. Despite suffering their first loss in three years, they still finished 7-1 to share the regular-season title in the Olympic Conference. They went on to win the conference meet and take second at sectionals. With most of the roster returning, they should again be one of the premier teams in South Jersey.