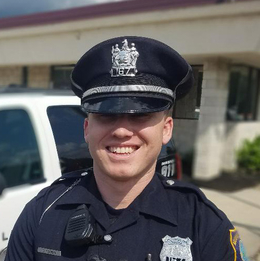 Officer CHRISTIAN McGOVERN, Mount Laurel
The Mount Laurel native graduated first in his class from the Camden County Police Academy and joined the Mount Laurel Police Department  in June 2017. McGovern can be seen out in the community talking to many township residents—especially children—to give them a better  understanding on how police officers serve and protect.

Why did you want to become a police officer?
“To be able to give back to and protect the community that afforded me the opportunities to be successful. I have always looked at police officers as men and women who are held to a high standard and I expected the same of myself.”

Chief PATRICK GURCSIK, Washington Twp.
Gurcsik, a lifelong resident of Washington Township, has been with the department since 1988 and was named police chief in 2017. Gurcsik has focused on changing the culture of policing and implemented a new mission and philosophy committed to community caretaking, with new programs including DARE, Shop With a Cop for underprivileged children at Christmas and more.

What was the most memorable moment on the job?
“My swearing in as the ninth Washington Township Chief on Jan. 2, 2017. My son Anthony watched on crutches recovering from a broken femur playing hockey and my other son, Angelo, watched  from Italy while on a school trip.”

Patrolman BRIAN FITZPATRICK, Evesham
Fitzpatrick has a bachelor of arts degree from Richard Stockton College and began his law enforcement  career in Seaside Park. He attended the Ocean County Police Academy and was hired in 2000 by the Evesham Police Department. Fitzpatric k has over 19 years of police experience. He has been married for 15 years and has two daughters.

What was the most memorable moment on the job?

“Being recognized by MADD (Mothers Against Drunk Driving) over the last several years. It's a very prestigious award to receive. I put forth a proactive approach to consistently arrest drunk drivers. I aim to make the Township of Evesham a safer place for all of the residents.”

Sergeant BRETT LIGHTNER, Haddon Heights
Lightner graduated from Haddon Heights High School in 2005 and attended Fairleigh Dickinson University, where he obtained a bachelor’s degree. Lightner went to the Cape May County Police Academy in 2010, where he served as class president. He is now an operator on the Zone 5 Tactical Team of the Haddon Heights Police Department.

What was the most memorable moment on the job?
“There have been so many memorable moments during my eight-year career. I have helped deliver a baby, received a Life Saving Award after successfully performing CPR and received an Honorable Service Medal for a felony car stop conducted on an attempted murder suspect. Most recently, I spearheaded our agency’s first Coffee With a Cop event at our local coffee shop, Trouble Brewing.”