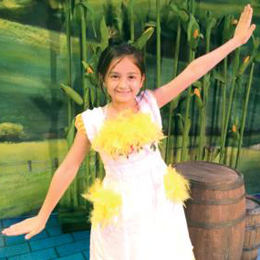 Her passion for theater began at the age of 5 when she performed as Tam in Miss Saigon. She then went on to perform in The King & I and South Pacific at the Walnut Street Theatre. Since her young start in the acting business, Hampton has continued her acting career by doing voiceovers and commercials. What stands out to Hampton are the connections and close friendships she has made with cast members who motivate her to perform on stage.

Interests in musicals are only one portion of Hampton’s life. When she’s not practicing for a role, you can find her playing the piano or ukulele. She also plays basketball and runs track at Christ the King Regional School in Haddonfield.

Hampton’s latest performance at the Walnut Street Theatre will be in Honk! Jr. where she has three roles in the musical inspired by The Ugly Duckling.