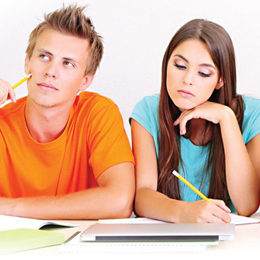 College is one of the most exciting times in a student’s educational career, but it comes with a huge decision that at times can be very scary: deciding on a field of study. Remember when your grandmother and friends of the family would ask, “What do you want to be when you grow up?” For a lot of students, choosing a college major is the first real step toward answering that question. And while it may seem like there is a negative stigma for those heading into their freshman years—at the ripe age of 18—with undeclared majors, it’s actually a norm that can prove to have a more beneficial outcome.

Suburban Family took the time to speak with college officials in our area about how important it is to have a college major as a freshman, if being undecided has any setbacks, the benefits of being an undecided student and advice on how those students can best determine their majors.

Weighing the Importance
The No. 1 question incoming freshmen need answered is just how important is it to have a major decided upon arrival on their first day. After speaking with the experts in the field, we found that it’s not as much of a deal-breaker with colleges and universities as people may have previously thought.

Neumann University’s Dean of Academic Support, Michael J. Mullen, says having a major when you first start college isn’t really important at all. “About 25 percent of our students come in undecided, but in reality the data that we see is up to 70 percent of students are going to change their major,” explains Mullen.

Within Neumann’s academic advising center, they run on the notion that just because a student is undecided doesn’t mean they have no idea what they want to do with their life. Mullen says it usually means that they have narrowed it down to an area but can’t pinpoint a precise major or that they may be deciding between two.

“We like to refer to them as openminded students,” Mullen says. “Really at 18, their worldly experiences have been very limited so college is intended to present some of that information that they don’t have relative to learning, the world and career within the world and present that to them. That’s why I think so much change occurs.”

Mullen even goes as far to say that Neumann has undecided major students who are truthfully more decided than those who have declared a major. Taking the college courses for that major “either affirms their decision or, for a lot of our students, they determine it’s not what they thought it was,” explains Mullen.

Steering Clear of Setbacks
If you’re a concerned parent, your first thought might be that if your student is entering college without a major that they are going to fall behind, but that’s not the case. Every official we spoke with did not think there were any setbacks relating to coming into college as a freshman without a major; a lot actually encouraged it.

At Monmouth University, where 30 percent of the students enter without declaring a major, Director of Undergraduate Admission Victoria Bobik says those students need to declare a major by the end of their second year—which was the case with the other schools we spoke with. “I don’t think [there are any setbacks] as long as you are talking to your advisor about what options you are thinking about,” says Bobik. “That advisor can help you fit different options into your course selections and academic plan so that you have flexibility when choosing your major later on.”

And at a community college like Camden County College, Director of Recruitment Melanie Iannuzzi says she believes declaring a major is even less important. “We get a lot of undecided people because they save a lot of money with the cost savings of coming here so that they can explore and see what they want to do,” Iannuzzi explains. “It’s all about trying to get people on a track.”

Reaping the Benefits
Incoming freshmen actually have a better chance of benefiting in the long run without a declared major than those who choose one. Without a major, students are able to explore the possibilities at their respective colleges and choose what best suits them rather than run the risk of changing their major later in their college career.

Joseph Connell, assistant vice president of student success at Ramapo College of New Jersey, says college is all about exploring and finding your passion.

“I recently shared with a group of undeclared students in our Living Learning Community at Ramapo College that they should focus on ‘falling in love’ with a major and career that excites them,” Connell explains. “Recent data from Forbes.com suggests that over an individual’s 35-40-year career, they will change jobs at least six times. Thus, finding something your passionate about is extremely important.”

Connell says the data also reinforces that deciding on a major doesn’t mean that students are stuck doing that job in that area of study for the rest of their lives. “Instead, being undeclared allows students to move through a general education curriculum which focuses on the skills, such as critical thinking, effective writing and interpersonal communication, that are most in demand by employers today,” he says.

Getting Good Advice
If you are a high school junior or senior, or even a soon-to-be college freshman who is struggling with deciding on a major, there are resources to help you. The best thing that you can do right now is ask a lot of questions and look for advice from the experts.

Provost William J. Behre, Ph.D., chief academic officer at Georgian Court University, says the question he hears often is: “What advice can you give to high school students who do not have their majors decided?”

“[The] question comes up often at open house events, tours and info sessions at Georgian Court. I tell students the same thing I told my own collegeaged children: The best major is the one you will finish,” Behre says. “Think of it this way: ‘What is going to make you get up for class on a cold, dreary day with freezing rain in the middle of February?’ What you love learning will intrinsically motivate you, making you more likely to finish your degree.”

Iannuzzi hears the same question as Behre from high school juniors and seniors. “I always give them the advice that we are here to offer a community college where you don’t have to spend a lot of money and you can come here and explore because we have so much to offer,” she says. “But, I also tell them to do their homework early and have fun with it and research schools and go out on campus tours, visit colleges, universities, community colleges and trade schools—visit them all.”

And while it may seem like you are making the biggest decision of your life, know that you are not alone.

Bobik instructs soon-to-be freshmen not to stress over this decision. “Discovering your major and career path is a part of the college experience. This is the beginning of a journey, and part of that journey is discovering what is available to you,” she explains. “Sometimes finding out what works for you also involves discovering what doesn’t connect with you. This is fine and [is] part of the process. Try to enjoy this—you will find your way.”