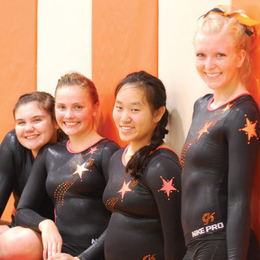 PLAYERS TO WATCH: Paige Rhoads, who captured her third straight all-around title at the Olympic Conference Championships last season and was the South Jersey champion on the beam, has decided to focus on cheerleading for her senior season. While that is a big loss for Cherokee, the good news is the return of senior Maddie Fearon, who performed consistently well during dual meets and placed in the top six in three events at the conference meet. Junior Jennifer Costella is another strong competitor and sophomore Bella Cinelli showed potential as a freshman. Juniors Palak Jain and Madison Santangelo also hope to play important roles, while freshmen Skylar Sustek and Bridget Willson and sophomore Mackenzie Davis add depth and young talent to an already solid team.

OUTLOOK: The Chiefs went 6-2 in another impressive season in 2016. They expect to continue their winning ways this fall.

PLAYERS TO WATCH: Team captain Caterina Ramirez was a key competitor during dual meets as a sophomore and could be ready for a breakout season as a junior. She is especially strong on the vault and balance beam and took eighth in the all-around at the Olympic Conference Championships. Juniors Hollyanne Clemence and Stephanie Evans will serve as co-captains, and sophomores Katelei Clark and Teela Idais are other top contributors. Other returners include junior Emma Watson and sophomores Xianna Aguilar, Emily Friedhoff, Caitlin Hutchison and Chiara Silvestro.

OUTLOOK: The Indians were competitive in all of their meets and finished with a 4-4 record in 2016. A talented returning core should lead to another solid season.

PLAYERS TO WATCH: Seneca will once again be sparked by junior Brittany Eisenhower, who has been a standout for the Golden Eagles since her freshman year. Last season she placed fifth on the uneven bars, eighth in the floor exercise and ninth on vault at the Olympic Conference Championships. She also qualified for sectionals in all three of those events. Junior Mikayla Bednarek is another top returner who performed consistently well in dual meets and posted 11th-place finishes on the vault and floor at the conference meet. Senior Isabelle Graff and junior Kacey Knapp placed 10th and 12th, respectively, in the floor exercise at the conference meet and will also be contributors this season. Other returners hoping to make an impact are juniors Emily Dayton and Lola Marian and sophomore Taylor Park.

OUTLOOK: With most of their gymnasts back in the fold and Eisenhower leading the charge, the Golden Eagles hope to improve on last year’s 3- 7 record.

PLAYERS TO WATCH: Callie Reed put together an impressive rookie season for Shawnee and is back to lead the way for the Renegades as a sophomore. She placed fifth in the all-around at the Olympic Conference Championships and made her presence felt in dual meets as well. Zoey Chenier is another talented sophomore, while Amanda Michaels, Kat Humphreys and Fabiana Ferraiolo are senior leaders. Other returners include Nina Caceres and NaShaye Nixon. There are three freshmen set to join the squad, and at least one of them is expected to contribute right away.

OUTLOOK: The Renegades have been rebuilding over recent seasons, but better times are ahead with Reed and a strong nucleus returning this season.

PLAYERS TO WATCH: Washington Township graduated a pair of standouts but is excited about the return of senior Allyce Andricola. She placed second on floor and ninth on bars en route to a sixth-place finish in the all-around at the Olympic Conference Championships. Andricola also took third on beam at sectionals and competed at states. Junior Alyssa Lombardi is another key returner who placed 12th on vault at the conference meet. Maddie Harris provides senior leadership and other returners expected to contribute are sophomores Julia Wilke, McKenna Crabtree and Julia Robinson.

OUTLOOK: The Minutemaids went 8-0, captured the Olympic Conference title and took third at sectionals last year. They hope to remain competitive despite the key losses to graduation.

To see a complete list of our Fall Sports Schedules, click here to go to our digital edition.