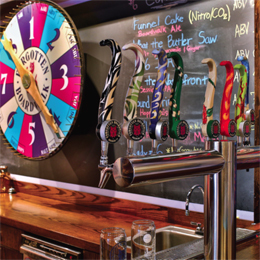 If you aren’t a fan of craft beer, we have some bad news for you: Breweries are popping up faster than we can finish our last pint. From new establishments just finding their heels or seasoned professionals complete with their own canning line, South Jersey breweries have proved that they are here to stay. Whether you prefer a hoppy IPA, a creamy stout or a cloudy Belgian wit, you’ll want to check out some of our favorite area breweries for your next post-work happy hour.

Flying Fish Brewing Co.
Somerdale
South Jersey’s first microbrewery is now the state’s largest craft brewery. Their selection of award-winning beers is well-balanced and includes IPAs, Belgians and crowd-pleasing seasonals. Not to miss is their Exit series— creatively brewed styles with a nod to our beloved New Jersey Turnpike.

Forgotten Boardwalk Brewing Co.
Cherry Hill
Stepping through the door of this whimsical brewery feels like stepping back in time. From the skee ball machines and fun house mirrors to the vintage boardwalk artwork and communal board games, the tasting room is as entertaining as the beers on tap. Known for their Funnel Cake (available on nitro) and What the Butler Saw variants, their brews are carefully crafted with unique ingredients that won’t soon be forgotten.

Eight & Sand Beer Co.
Woodbury
A send-up to train transportation—which often carried beer-brewing ingredients to our area—Eight & Sand is located in one of the oldest train hubs in the state. Their indoor and outdoor tasting areas—which include communal picnic tables and firepits—are perfect for gathering with groups. Their drinkable beers range from IPAs, a Belgian Dubbel and a Saison brewed with Sewell’s Anthony’s Local Honey, making this a spot you’ll want to settle into for a few hours.

Spellbound Brewing
Mount Holly
One of the largest and fastest-growing breweries in South Jersey, Spellbound has an in-house canning line, allowing them to package 36 cans per minute. Core year- round brews like the IPA (made with six different American hops), Porter (with a variety aged on Palo Santo Wood) and Cherry Belgian Tripel are solid and bold, but you’ll never know what other special varieties will pop up for a limited time in their tasting room.

Kelly Green Brewing Co.
Pitman
This neighborhood nano-brewery is barely a year old, but has already made history as the first brewery in Gloucester County. Located on Pitman’s main drag, Kelly Green has a starting lineup of four signature beers (IPA, coffee porter, Belgian wit and brown ale), all of which cater to the traditional beer drinker while still providing something fresh so close to home.

Double Nickel Brewing Company
Pennsauken
Inside this brewery you’ll find a well-rounded and lengthy list of beers for every palate, as well as an expansive tasting space designed in a modern-industrial aesthetic. Stop in any time for their light and crisp Pilsner or malty Vienna lager and make sure to return often for special batches and seasonals where their creativity really shines.

Devil’s Creek Brewery
Collingswood
Tucked right off of Haddon Avenue is this devilishly fun rustic-themed brewery where you can enjoy anything from Caramel Apple brown ale—brewed with caramel and 50 pounds of brown sugar—to a smoked Toasted Rye or Devil’s Nectar, a honey saison. Keep an eye on their social media feeds for updates on special events, like their monthly trivia night.

Lunacy Brewing
Magnolia
Friends from all walks of life gather in this casual brewery that will soon be moving from Magnolia to a new home in Haddon Heights. Hop heads will rejoice in the offerings, including an Imperial/double IPA with Amarillo hops and their Hopwhacked West Coast IPA. Consider capping off the night with a pour of Rocket Chocolate Peanut Butter Stout. It’s like a drinkable dessert.

Nale House
Medford
Quality over quantity is the cornerstone of this brewery founded by hometown Medford residents. But the small batch brewing doesn’t lack in flavor. Belly up to the bar for their hoppy Locus Delicti IPA or light and refreshing American Blonde Ale, perfect for the warming temperatures.

Third State Brewing
Burlington
We never tire of the interesting combinations in the craft beer scene, and when we see something called “Melonero”—a habanero melon saison—on tap, then we know we’re in for a treat. And there’s more where that came from, including Broke and Hoppy (session IPA) and Galactic Sunflower (West Coast American IPA), plus much more in this revolutionary brewery.