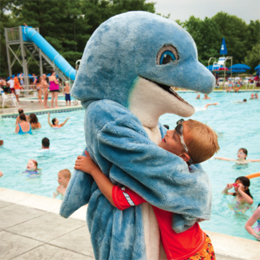 When attending Chartwell’s Happy Day Camp, campers have a blast while also actually learning at the same time. That combination of learning and fun keeps both kids and their parents happy. The camp is only entering its third year but has grown so quickly due to its success that it is now opening a second location at the Ron Jaworski Ramblewood Swim Club in Mount Laurel. Happy Day Camp was ACA (American Camp Association) accredited in its first year.

“Our first year, the camp came together almost out of the blue as a result of meeting a demand for a program like this,” explains Sharon Damiano, camp director. “We averaged between 60 and 80 kids that first year.”

By the second year, it had already doubled. And Damiano says they are anticipating that may happen again. As word spread about Happy Day Camp to neighboring communities, the need for a second lo- cation became evident.

“We really stress the waterproofing program,” says Damiano. “All of the kids get swim lessons and those who need extra help, get extra one-on-one attention so they can pick up the skills.”

Having recently hired a sports director, the camp is also expanding upon an already lengthy list of activities and sports for all levels. The camp has tennis courts, baseball fields, basketball courts and even a volleyball court.

Happy Day Camp also hosts “in-house field trips,” meaning that instead of traveling off-site, Damiano brings the entertainment directly to the kids. The activities and entertainment are typically correlated with the theme of the week. For instance, for “Chartwell’s Got Talent,” Damiano has brought in karaoke. The campers work all week on their talent and then per- form a talent show for the parents at the end of the week. During Sports Mania, the Phillie Phanatic has visited. The camp even hosted a stunt bike show. And during safety week, kids get to tour fire trucks and ambulances. This year brand new themes that are bound to be huge hits are Harry Potter, Ninja Warriors and Star Wars.

Camper mom Kristin says her kids love the theme each week and it’s something they look forward to. Kristin says what made her happy was the excellent staff-to-child ratio so that her kids didn’t get lost in the shuffle.

The camp is also incredibly accommodating with extended hours for working parents. While parents might have initial reservations about sending their sons or daughters off to camp, those concerns are quickly allayed when they see just how much fun is being had.

Jennifer, a camper mom, writes that “My son is like any other six-year-old, however he is also a below- the-knee amputee. I needed to know that the place my son went was going to be able to take on the added task of assisting him when he needed his prosthetic. He also couldn’t swim yet. I researched all the local camps and talked to several directors but it was the conversation I had with Sharon that made it an easy decision. Sharon said to me: I’ll have him swimming with and without his prosthetic in two weeks. Sure enough, my son passed his swim test in two weeks.”

It is testimonials like these that make the job so rewarding, Damiano says. When kids come to Chartwell’s Happy Day Camp they are not only learning lifelong skills, they are making lifelong memories.