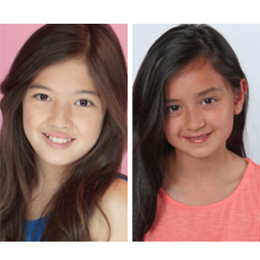 Eleven-year-old Chu, of Mount Laurel and 10-year-old Hampton, of Cherry Hill, are sharing the stage this fall in Philadelphia, splitting the role of Ngana in the Walnut Street Theatreâs production of South Pacific. The Rodgers & Hammerstein classic follows two lovers entangled in war on the island of Liat during World War II.

Running from now until Oct. 23, Chu and Hamptonâs character Ngana is one of the children of the main character Emile de Becque (played by actor Paul Schoeffler), and opens up the entire production with a song. The girls are the youngest members of the cast and thus will split the role between productions throughout the month.

Both Chu and Hampton are students of the Theatre School at Walnut Street Theatre and will act alongside neighbor Kwanchi Loo, also from Cherry Hill, whoâalongside actor Ethen Jih-Cookâwill play their brother Jerome.