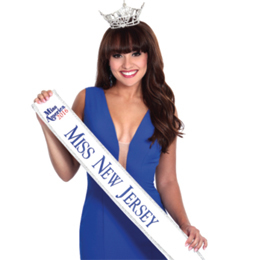 South Jersey had a lot to celebrate this summer, as the Miss New Jersey crown landed in our area and on the head of Mantua’s Brenna Weick. Weick captured the title at the end of June, and will represent the state in the Miss America competition.

This was Weick’s fourth time on the Miss America stage, and she also won Miss New Jersey Outstanding Teen in 2009 at the age of 14. And while she’s been in the competition before, it was her first time singing as her talent, as she had previously danced in all competitions. Weick performed “Someone Like You” from the musical Jekyll & Hyde, the same song she will perform at the national competition later this summer.

Since winning the title, Weick—who just graduated with a degree in psychology in May—has been touring the state fulltime while also preparing for the big show. Look for her on Sept. 11 in Atlantic City to see if she takes the title of Miss America 2017.