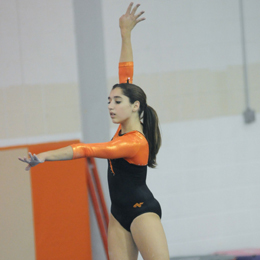 PLAYERS TO WATCH: After two straight impressive seasons to begin her high school career, junior Paige Rhoads enters 2016 with high hopes. Last year she repeat- ed as the all-around champion in the Olympic Conference, as she took first on vault and bars and second on beam and floor exercise. She also placed third at the South Jersey Championships and competed at states. Cherokee graduated several other top gymnasts, but joining Rhoads as key returners are senior Samantha Moreno and junior Madison Fearon. Sophomore Jennifer Costella should be ready for a bigger role and other returners who hope to contribute are sophomores Caitlin Cushing, Palak Jain and Madison Santangelo.

OUTLOOK: The Chiefs went 9-0 and claimed the Olympic Conference title in 2015 before finishing a close second to Washington Township at sectionals. They have some important spots to fill but should remain one of the teams to beat in the conference.

PLAYERS TO WATCH: Lenape graduated its top overall gymnast in Caroline Nestor, but brings back a key veteran in senior Kayla Dougherty. She won the all-around in a victory over Shawnee last year and also shined in a win over Seneca. Sophomores Stephanie Evans, Caterina Ramirez and Hollyanne Clemence showed promise as rookies and will be expected to play bigger roles. Other returners looking to contribute are senior Danielle Bernard and junior Julie Bang.

SENECA
Golden Eagles
PLAYERS TO WATCH: Sophomore Brittany Eisenhower enjoyed a stellar rookie season and highlights the returners for Seneca. In addition to shining during dual meets, Eisenhower also took second on bars at the Olympic Conference Championships. It will be exciting to see what she can do this fall. Jaylyn Gardner is a senior leader, while junior Isabelle Graff and sophomore Mikayla Bednarek also contributed last year. The Golden Eagles also have several promising newcomers joining the squad.

OUTLOOK: The Golden Eagles posted a 3-9 record in the first year under coach Amanda Kurtz and should keep making progress this fall.

PLAYERS TO WATCH: Junior Amanda Michaels is one of the only returners from last year and will be the leader for Shawnee as the team captain. Junior Fabiana Ferraiolo is another veteran in the program, while the Renegades will also count on Sarah Hewitt and NaSahaye Nixon. Freshman Callie Reed is expected to contribute, and several other newcomers could help in one or more events.

OUTLOOK: After a rebuilding campaign in 2015, the Renegades expect to take some steps forward this fall.

PLAYERS TO WATCH: Casey Hubbard established herself as one of the top competitors in South Jersey last year and is primed for a terrific senior season at Town- ship. Hubbard was the South Jersey champion on beam and took second in the all-around before ending her season at states. She was also the Olympic Conference champ on beam and floor en route to a second-place finish in the all-around. Senior Abigail Deal is another important returner who was a consistent per- former at dual meets throughout the season. Other gymnasts looking to contribute include juniors Madison Harris and Ariel Thompson and sophomores Kaitlyn Centola, Olivia Olszewski and Emily Ruddy. Four or five freshmen will also be joining the team to add depth.

OUTLOOK: The Minutemaids had a season to remember last year, as they slipped past Cherokee to claim their first sectional championship since 2011 and advanced to states. They graduated several leaders from their 6-2 team, but should be successful again with Hubbard leading the way.

To see a complete list of our gymnastics sports schedules, click here to go to our digital edition.