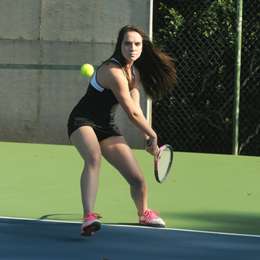 PLAYERS TO WATCH: Caitlyn Sorelle has graduated after playing first singles the last two years, but five starters are back from a very special season at Bishop Eustace. That includes sophomore Caitlin Deffler, who played second singles as a freshman and posted an 18-1 record in team matches. Junior Ashley Sorelle, Caitlyn’s younger sister, is another experienced singles player who finished with a 15-3-1 record in team matches in the third spot. Senior Sara Weill had a tremendous season at first doubles and could move into a singles position, while senior Caroline Hromy and junior Meaghan Bohny return after going 15-4 at second doubles and reach- ing the round of 16 in the South Jersey Interscholastic Championships. Sophomore Sydney Sperling will look to crack the starting line-up and other players expected to contribute are seniors Lacey Todd, Camille Marsdale and Meghan Walker.

OUTLOOK: The Crusaders posted an impressive 17-1-1 record in 2015 and won the South Jersey Non-Public A championship, the third sectional title in school history. Their only loss came to Holy Angels in the state final. With so many veteran players returning, expect Eustace to be a contender again this fall.

PLAYERS TO WATCH: Cherokee graduated its second doubles team but brings back four starters. Leading the way is sophomore Sanjana Panjala, who locked down the first singles position as a freshman and should only get better this fall. She was named all-Group IV by the South Jersey Tennis Coaches Association. Senior Veda Lin played second singles, while juniors Kate DeLia and Kaitlyn McVeigh were first doubles partners last season. Other experienced doubles players are juniors Lindsay Mullen and Aykys Salchak.

OUTLOOK: The Chiefs went 10-6 in 2014, doubling their win total from the year before, and reached the South Jersey Group IV quarterfinals. They have several starters to replace but should remain competitive.

PLAYERS TO WATCH: Cherry Hill East graduated three starters, including two singles players, but does bring back one of the top players in the state. Senior first singles Stephanie Yanosov went 18-0 in team matches, reached the semifinals of the South Jersey Interscholastic Championships and was rewarded with all-state second-team honors. She’ll look to end her career with another remarkable season. Her twin sister, Natalie Yanosov, is another key returner who played first doubles last year and could move into a singles spot. Freshman Pallavi Gocouldas is expected to have an impact right away and also could play singles. Senior Sarah Jang and junior Rebekah Colacot return after playing second doubles together. Junior Mattea Boyarsky saw time at doubles and junior Jocelyn Doroton will look to crack the starting lineup as well.

OUTLOOK: The Cougars went 19-2 and reached the sectional final for the fifth straight year in 2015, winning the South Jersey Group IV title for the third time in that span. With the Yanosov twins leading the way, they expect to be contenders again.

PLAYERS TO WATCH: The entire starting lineup for Cherry Hill West in 2015 was seniors, so this year’s squad will obviously have a new look. Senior Tayler Zachary saw time at doubles last season and will look to earn a starting position. Senior Jade Stubblefield is another returner who is expected to contribute.

OUTLOOK: With so many losses to graduation, the Lions will be counting on varsity newcomers as they look to build the program.

PLAYERS TO WATCH: Clearview was senior-heavy last fall, with five seniors in the starting lineup. One of the returning starters is senior Anna Kmiec, who was part of the first doubles team that won the Gloucester County championship. Senior Grace Chell is also back after playing second doubles and winning the Tri-County Conference title. Both Kmiec and Chell are potential singles players this year. Other players who will look to take on bigger roles are seniors Sam Payer and Ariana Spinney.

OUTLOOK: The Pioneers went 23-1—with their only loss coming in the South Jersey Group IV semifinals—and claimed the Gloucester County team crown for the second year in a row. They won’t be at the same level in 2016 but hope to remain competitive.

OUTLOOK:The Vikings have a great chance of improving on last year’s 4-14 record with a strong returning cast led by Barry.

PLAYERS TO WATCH: Sophomore Taylor Brenza emerged as Gloucester Catholic’s third singles as a rookie and could possibly move into the top spot this fall after the graduation of the first and second singles. Another sophomore, Gianna Gussen, could also fill one of the singles positions if she decides to come out for the team. Junior Laura Blaston and sophomore Carly Cappello are other experienced returners who will contribute. Freshman McKayla Labbree—the younger sister of Morgan Labbree, the Rams’ No. 1 singles the last three years—is expected to have an immediate impact.

OUTLOOK: he Rams have some young talent in the program and hope to make strides after a 3-11 season.

PLAYERS TO WATCH: Haddonfield only graduated two starters and is led by return- ing singles players Olivia Alberto and Katie Pileggi. Alberto, a junior, played first singles and reached the semifinals at the Camden County Championships, finishing the year with a 25-12 record. Pileggi, a senior captain, competed in the second spot and won the Colonial Conference singles championship on her way to a 32- 6 record. Senior captain Lizzy Benedict also returns after being part of the first doubles team that won the conference title and reached the semifinals of the South Jersey Interscholastic Championships. Juniors Cassidy Cao and Rachel Rozenfeld had a solid season at second doubles, and other experienced players who will vie for starting spots are seniors Julia Bersani, Olivia MacCluen and Tesh Patel; juniors Megan Burns and Nina Liloia; and sophomores Madison Hammel, Claire Kenny and Becca Whiting.

OUTLOOK: The Bulldawgs’ 26-3 season was highlighted by the South Jersey Group II title, the program’s 14 consecutive sectional championship. Extending that streak to 15 is a pretty safe bet.

PLAYERS TO WATCH: Kingsway had an extremely young line-up in 2015, so that means that most of the starters are back. Included in that group are juniors Jada Mack and Julianna Meyer, who held down the first and second singles positions, respectively. Senior Catherine Morris earned the third singles spot last year, while sophomore Madison Lanham also saw time at singles. Senior Brenna Dolan and sophomore Ashley Jirik both started at doubles and junior Alyssia McNamara will also seek a bigger role.

OUTLOOK: The Dragons went through their growing pains in a 1-18 season, but the experience should lead to progress this fall.

PLAYERS TO WATCH: Junior Shannon McCarthy has been a starter at singles for Lenape since her freshman year and it will be exciting to see what she can accomplish as an upperclassman. Last year she took over the No. 1 spot and reached the round of 16 at the South Jersey Interscholastic Championships. Senior Smriti Nair is another returner who played second singles in 2015. Senior Alexis Cao was part of the first doubles team that won the South Jersey Interscholastic title, while senior Meaghan Corej played second doubles and was part of a Burlington County Open crown. Senior Shannon Lambert could also play a big role this year.

OUTLOOK: A year after winning their first sectional title in 22 years, the Indians made another run to the final before dropping a tough 3-2 decision to Cherry Hill East. They also took second at the Burlington County Open and finished with a 16- 3 record. They should be in store for more success this fall.

PLAYERS TO WATCH: Moorestown brings back five starters, including first singles Emily O’Neil, so this is shaping up as another big year. O’Neil went 17-5-1 as a sophomore, reached the quarterfinals of the South Jersey Interscholastic Championships and the semifinals of the Burlington County Open. Senior Anna Mary Shetler also made the South Jersey quarters and was the county champion at third singles. The first doubles team of senior Andrea Giacobbo and junior Camilla Hoz de Vila also won a county title and reached the South Jersey final. Junior Maddie Sherman started at second doubles, and other returners include juniors Terry Nguyen and Sundari Parise.

OUTLOOK: The Quakers’ 21-4 season included the Central Jersey Group III crown—their 27th sectional championship in a row—and a berth in the state final. They also won the county team title and will be a force again this fall.

PLAYERS TO WATCH: Seniors Grace Kim and Jess Ferber have been out- standing players at Moorestown Friends for three years and it will be interesting to see how they finish up their careers. Kim, who has played first singles since her freshman year, won the Burlington County Open title for the third straight year and reached the final of the South Jersey Interscholastic Championships last fall. Ferber captured the county’s second singles title, went 22-2 and joined Kim on the all-South Jersey team. Junior Margaux Fox played first doubles as a sophomore and could move into a singles spot or stay at doubles. Sophomores Liz Huettl, Serena Lin and Lauren Radack also return and will look to crack the starting lineup. Four talented fresh- men will also join the program, including Reena Mohsen-Breen, who has an excellent chance of making the singles lineup.

OUTLOOK: The Foxes went 8-5 and reached the South Jersey Non-Public B semifinals last year. With Kim and Ferber leading the way they will be a fun team to watch this fall.

PLAYERS TO WATCH: Liz Danovich, a junior, stepped into the starting lineup as a sophomore and held down the third singles position for Paul VI. She will be a candidate for the No. 1 spot this year. Junior Holly Thompson and sophomore Morriessey Walsh played first doubles together last year and could move into singles positions this fall. Senior Kat Danovich is another returning starter who will contribute.

OUTLOOK: The Eagles have some young talent in the program as they look to build a strong foundation.

SENECA
Golden Eagles
PLAYERS TO WATCH: Seneca will have a group of five seniors returning and vying for starting spots.That includes Jessica Errigo, who has played first singles the last two seasons and was named all-Group III by the South Jersey Tennis Coaches Association in 2015. Tori Felt and Yvette Kurian received the same recognition at first doubles and reached the round of 16 at the South Jersey Interscholastic Championships. Devon Cassise and Brittany Farrell round out the returning starters from last year after playing second doubles together. Juniors Rachel Tocci and Sarah Moschini are also expected to contribute along with some incoming talent.

OUTLOOK: The Golden Eagles reached the section- al final for the third time in four years and finished with a 13-11 record last year. Strong senior leadership should lead to another successful campaign.

PLAYERS TO WATCH: Shawnee brings back almost its entire starting lineup, including senior Caleigh Masterman, who has played first singles every year of her career. Masterman reached the round of 16 at the South Jersey Interscholastic Championships and was named all-Group IV by the South Jersey Tennis Coaches Association. Another returning singles starter is sophomore Davica Massaro, who earned the second spot as a rookie. Senior Nikki Ferrer and junior Natalie Fisher played first doubles together, and the sec- ond doubles team of junior Hadley Miller and sophomore Dominique Adornetto made it all the way to the quarterfinals at the South Jersey Championships.

OUTLOOK: The Renegades posted a 12-4-1 record and reached the South Jersey Group IV quarter-finals in 2015. With a veteran like Masterman and so much young talent, they should be even better this season.

PLAYERS TO WATCH: Washington Township suffered key losses to graduation, including its entire starting singles lineup. One of the key returners is senior Ashley Basat, who played first doubles and will likely move into a singles spot. Seniors Micaela Weiserth and Aurelia DelRossi also have doubles experience and will contribute. Several varsity newcomers will also be counted on this fall.

OUTLOOK: The Minutemaids were competitive last year and finished with a 9-10 record. Their success this season will depend on how quickly the new starters can adapt to the varsity level.

To see a complete list of our girls tennis sports schedules, click here to go to our digital edition.